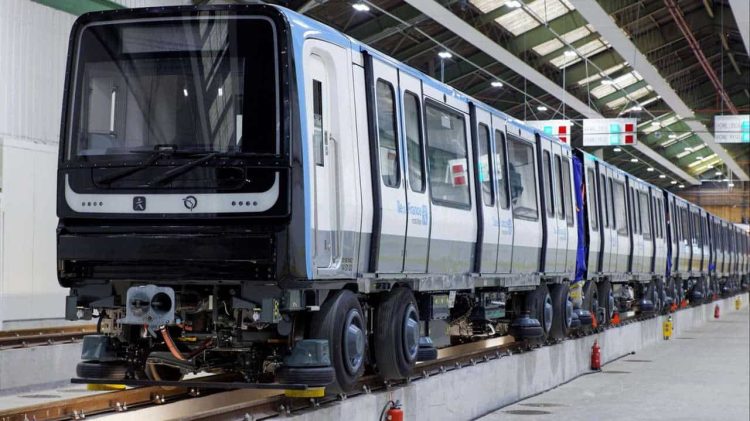 The Île-de-France Mobilités, which is the organisation that runs different transport around the Paris and  Île-de-France areas, has asked Alstom to provide it with 19 five-car MP14 metros with drivers cabs for line 11 of its network which is run by RATP.

The order which is funded totally by Île-de-France Mobilités will cost €132 million and falls within an existing contract structure made in 2015 which will see Alstom deliver a maximum of 217 MP14 trains over a period of 15 years with an ultimate total of more than €2 billion and is part of a modernisation strategy of all Île-de-France Mobilités network rolling stock.

There has also been a secondary order of 20 extra five-car units with drivers cabs for Line 11 which was honoured in February 2018.

The impressive cutting-edge metro MP14 gives a remarkable level of comfort and more importantly safety thanks to its internal layout.

Seating has been designed based on an alcove theme that is conducive to both conversation and privacy. Spacious reception areas give excellent accessibility for passengers with dedicated areas of boomeranged-shaped seats to give improved passenger flow and increased capacity.

MP14s feature LED lighting throughout the entire metro which gives comfort by eliminating dark areas, supports and steadying points that are fully compliant with safety regulations and provide extra comfort for passengers travelling on the train.

A special design for the MP14 driver’s cab for Line 11 orders have been edited to include feedback from previous versions of the cabs with the newer version featuring the latest ergonomics which is supported by RATP drivers and occupational physicians.

As well as offering improved passenger experience, the performance of the units will also mean energy savings and an easier maintenance program which will keep costs well under control whilst they are running. The 100% electric braking system recovers energy and recycles it into the network as electricity, this process limits the emission of fine particles created by mechanical breaks.

The MP14’s innovative system also reduces energy usage and reduces air pollution by around 20% whilst also being 40% quieter than other metros currently in usage on Line 11.

It is expected that Line 14 will receive approximately 20 automated metros of eight cars each which should be completed by the end of 2021 with the first six-car automated metros on line 4 being tested at the moment.

Production of the five-car metros began during late 2020 with the first metro beginning validation testing on RATP tracks in summer 2021.

Alstom has 16 sites across France and 8 have been involved with this impressive project, the sites are Valenciennes completing studies, integration, validation, and testing, Le Creusot for the bogies,
Ornans for engines production, Villeurbanne for onboard computerised systems, Tarbes for traction, Aix-en-Provence for safety, Reichshoffen for collision investigation and Saint-Ouen for design work.

Jean-Baptiste Eyméoud, President of Alstom France, says: “With the first MP14 trains entering commercial service in October 2020 on line 14, Alstom is delighted to have received an additional order for these innovative trains. The progressive arrival of MP14 metros on lines 14, 11, and 4 (in that chronological order) will directly improve the daily lives of hundreds of thousands of passengers in Paris and the Île-de-France region. Alstom is delighted with the renewed confidence of its customers, Île-de-France Mobilités and RATP,”

“The progressive arrival of MP14 metros on lines 14, 11, and 4 (in that chronological order) will directly improve the daily lives of hundreds of thousands of passengers in Paris and the Île-de-France region.”

Train operator Great Western Railway has operated the first electric-only train to and from South Wales.