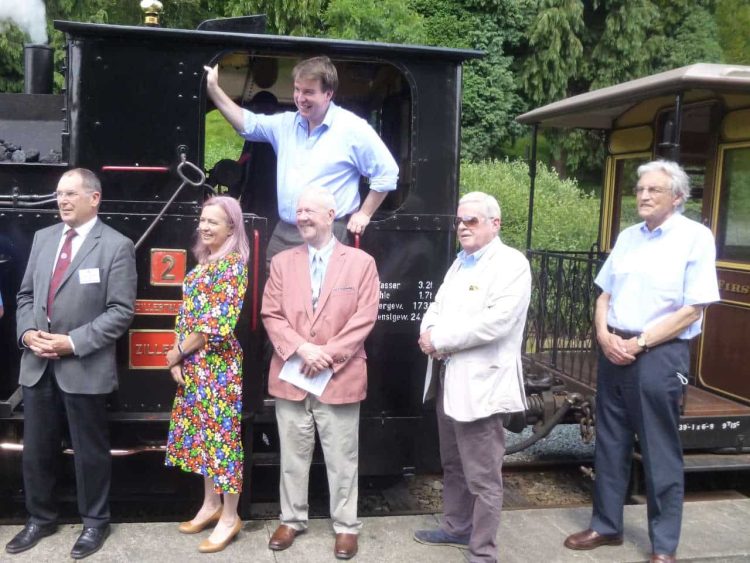 The Welshpool and Llanfair Light Railway hosted a historic event for the All-Parliamentary Group on Heritage Rail by running a historic ‘Parliamentary Train’ to Llanfair Caereinion on Friday the 16th of July 2021.

‘Parliamentary Trains’ came into service after the Regulation of Railways Act in 1844 which demanded that each train company run a minimum of one train during each weekday on every line which would carry third-class passengers in a covered carriage at a fare which was never more than one penny per mile, as a way to give everybody the chance to use the railway not just the wealthy.

The All-Party Parliamentary Group on Heritage Rail was created as a centre for discussion by parliamentarians to focus on heritage railways and the impressive contribution they make to their local and regional economies alongside the opportunity to offer skills training.

In 2019 the group also reported on the future supplies of coal which is a subject close to the heart of many heritage rail enthusiasts. Currently, they have an enquiry underway covering public transport and heritage railways which will be released in July 2021.

The visitors attended the popular heritage line and encountered stations and workshops along with getting to meet staff and volunteers at the railway. The Welshpool & Llanfair Light Railway attract many visitors to Wales and also has connections with other railways from around the globe.

Joining the group was Leader of Powys County Council, Councillor Rosemarie Harris and Montgomeryshire MP Craig Williams who also lives in Llanfair and was very proud to show his fellow Parliamentarians the railway which is a huge tourist attraction for his constituency. Also Lord Faulkner of Worcester, president of the Heritage Railway Association, former Education Secretary Baroness Morgan of Cotes who set up the All-Party Parliamentary Group on Heritage Rail and also a director of the Great Central Railway. MP for West Bromwich and former railwayman Lord Snape, and Lord Grocott, president of the Telford Steam Railway were in attendance.

The group journeyed the line meeting volunteers and trustees at Llanfair and where Lord Faulkner presented the Heritage Rail Association Award that he sponsors for Young Volunteer of the Year to Oliver Edwards who is a volunteer on the line and also a trustee of the railway.

Chair of the APPGHR Liz Saville Roberts MP (Dwyfor Meirionnydd) said: “The 12 Great Little Trains of Wales are a main attraction for visitors to North Wales, and they also provide valuable jobs and skills training for young people, so it is great to visit the railway today and hear at first hand how they have built this successful business and survived the Covid pandemic.”

Montgomeryshire MP Craig Williams said: “The railway is much loved by the local community here and is a magnet for visitors to this very lovely part of Wales. With so many holidaying in Britain, we all hope this will be a good year for our heritage railways and for tourism.”