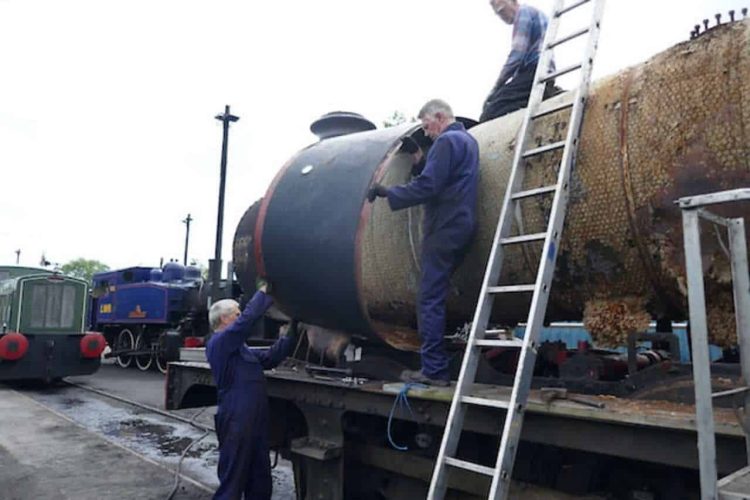 The 4253 Locomotive Company Ltd, which is based in Cranbrook, Kent, has reported that reaming work has been underway on GWR 5600 Class 5668’s water tank plate to allow for the difficult process of riveting.

The riveting required all sorts of contorted angles to reach some of the harder to reach spaces with many hands handling the hot rivets to complete the job.

The company has reported that all rivets were successfully placed and the heavy tank was able to be moved into an upright position again.

The front splasher was then welded into place with the one at the rear put in position and then tacked in. More panels are planned to be attached next week in time for more riveting.

GWR 5600 Class 6619 is continuing to be stripped which will allow a full inspection of the boiler.

This has involved removing what was left of the cladding and also stripping out insulation material which is positioned behind chicken wire.

This also included removing a steel framework that held the insulation in position. The removed steel framework will also be very useful as it will allow the locomotive company to create a pattern for building a similar structure to use for GWR 4200 Class 4253.

Unfortunately during the removal process, much of the delicate framework fell apart on moving it, so extra work will be needed to tack weld the structure back together, a job which has been likened to completing a jigsaw puzzle.

Finally, 6619’s bunker was prepared for lifting and is now awaiting stripping for salvageable parts along with the two tanks.

New daily freight service from Felixstowe to Tinsley for Freightliner Over the next three years, Network Rail has pledged to organise local planting schemes across Sussex, South London,...