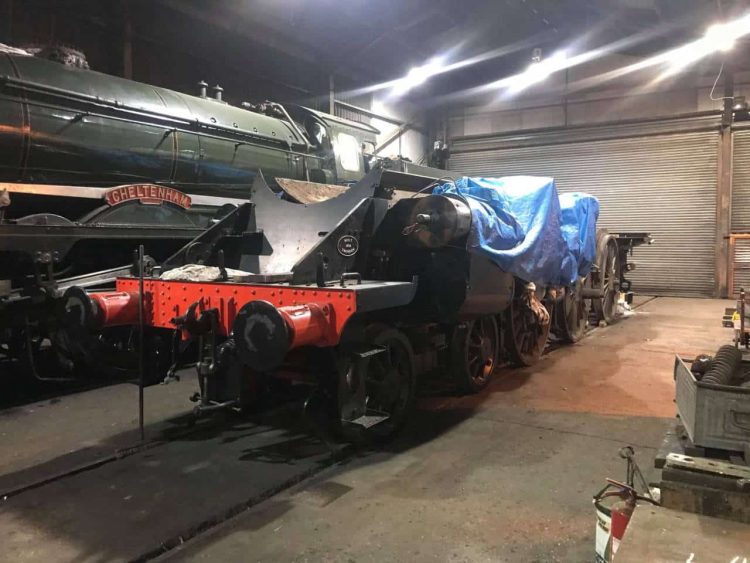 The Watercress Line (Mid Hants Railway) has released an update on progress to BR steam locomotive No. 75079, which is taking place at Ropley.

Despite COVID restrictions, the locomotive has made steps towards steaming again. In June, the refurbished bogie was placed back under the locomotive, which made it a 4-6-0 locomotive once again.

75079 was then on the move and spent some time at the wheel drop, but soon moved back to the main shed, in the centre road at the works.

A new container then arrived at Ropley following by work to remove cladding, crinolines and other fittings ready for the boiler lift.

Tuesday 22nd December 2020 was dubbed ‘Crane Day’. The Sparrows’ Crane arrived after a briefing, 75079 was pulled from the shed with a Class 08 locomotive and a sleeper wagon.

The crane driver set up the crane, and the boiler was to be lifted by four chains. Once test lifts were completed, and everyone was happy, the crane was lifted from the frames and moved onto the sleeper wagon.

Once the lift was completed, 75079 was pushed back into the shed, and its boiler was moved into the yard.

The lift had all gone according to plan, so the next lift has been discussed, and this was to move the new tender frames from the end of the yard onto two four-wheel trolleys to allow the tender frames to be moved into the shed for riveting.

Once the boiler was removed, the chimney and smokebox could be removed (

What’s next for the locomotive? The frames are now accessible to allow for cleaning and further work, and the driving wheels can be removed without having to worry about the boiler.

The boiler history shows that it has only ever been on the Southern Region and has only ever had one overhaul. The tender frames can now be worked on undercover as there is plenty to do.

We look forward to hearing more progress on 75079 as the months pass by.