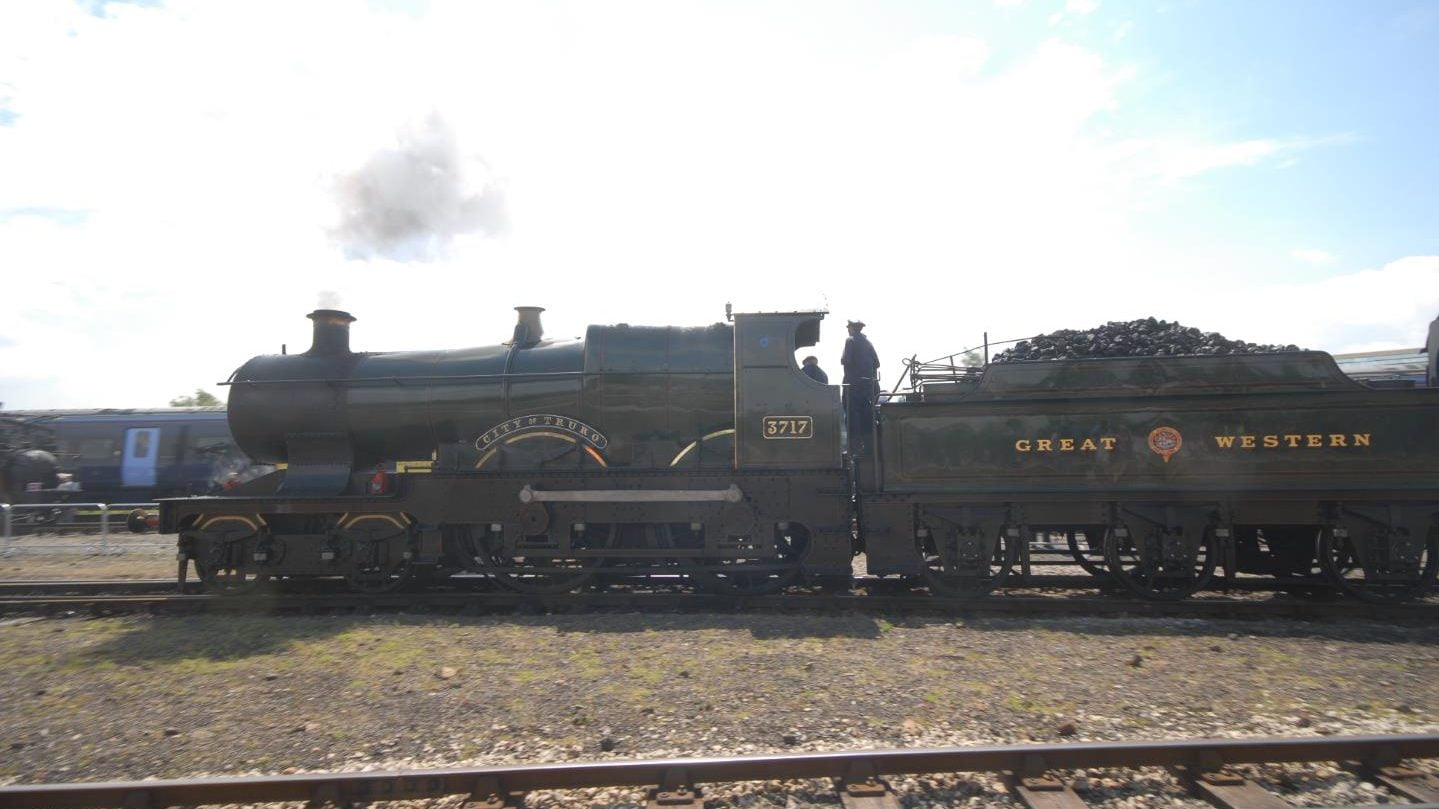 One of the early designs from Churchward, the 3400 (Later changed to 3700 series) ‘City’ class were built to meet traffic demands as well as allowing Churchward to test new designs, later used in his standard range of engines.

On receiving the post of Locomotive Superintendent in the summer of 1902, Churchward continued in developing his range of standard locomotives for the Great Western Railway.

While he conducted tests on which types and features would meet and be suitable for the GWR, he had to ensure there was sufficient motive power in the short-term to keep the system going.

So when the need for a faster express passenger engine arose, Churchward modified an older class to form the ‘Cities’.

Churchward put a big emphasis on the need for an efficient boiler, so designed what would later be known as the Swindon Standard No.4 Boiler. Key designs of the No.4 boiler was a tapered boiler (cone shaped) and Belpaire firebox (boxy in shape).

This boiler was fitted to an outside framed 4-4-0 of the Atbara class, No.3405 “Mauritius”, replacing the previously Standard No.2 boiler paired with the 3405. The Standard 4 boiler was larger, producing more steam and leading to a higher tractive effort.

After six months in March 1903, rebuilt “Mauritius” was joined a second engine, No.3433 “City of Bath”, forming the ‘City’ class. Featured on the new engine was an improved version of the Standard 4 boiler, with curved sides and tapered top of the firebox. A further two months later the class totalled 11. In early 1907, the decision was made to rebuild 10 ‘Atbara’ into ‘Cities’, which was completed by December 1908.

The ‘3400s’ proved to be successful in traffic, with Standard 4 boiler giving them the power to haul the express passenger trains of the day. When hauling the “Ocean Mails” between Plymouth and London Paddington, 3440 “City of Truro” was recorded running at 100mph, but whether the engine did achieve 100mph is highly debated. Nevertheless, the class could put in a good performance on engines up to 300 tonnes in weight.

The usual Churchward modifications were fitted, such as Top Feed and Superheaters (leading to extended smokeboxes), the class also changed over to piston rings from 1914. After developing a new type of front bogie from the de Glehn type, Churchward replaced Dean’s suspension bogie out for his own, which was used on majority of his engines with a leading bogie.

The ‘City’ class’ main purpose was to meet medium-term traffic demands while Churchward designed and built engines which could haul express passenger both present and future. By 1912, both the ‘Star’ and ‘Saint’ classes were in service, taking over the majority of the long-distance express trains.

This saw the now numbered ‘3700’ class move onto hauling secondary traffic and routes where heavier engines were barred from. They remained on this work for a decade and a half, before withdrawals started to be made.

1927 saw the first engine removed from traffic for scrapping, this being No.3718 “City of Winchester”. Over the next four years, the remaining locomotives were withdrawn, with the famous “City of Truro” being the last of the class to be withdrawn in 1932.

Initially, preservation was uncertain for 3717 “City of Truro”. Chief Mechanical Engineer Collett had sent a letter to the GWR’s Directors asking for the company to preserve the engine, but this was rejected.

Collett then contacted the LNER, who accepted the offer for “City of Truro” to join their museum in York. The engine spent the next 25 years based at York on display, apart from a move to a safe location during World War 2.

The Western Region of BR in 1957 brought “City of Truro” to Swindon for overhaul to full running order, with the engine appearing in 1904 condition as 3440. The locomotive hauled many popular special tours along with revenue earning services between Didcot and Southampton.

On withdrawn in 1961, “City of Truro” was repainted into its later livery and number of 3717 and was placed into Great Western Museum based at Swindon, along with other GWR engines and displays.

With the up-coming 150th Anniversary of the formation of the Great Western Railway in 1985, “City of Truro” was restored once again to celebrate this occasion, and went on to haul a number of mainline tours across the country. A couple of years later, 3440 stood in for 4468 “Mallard” as Great Britain’s guest at the Netherlands Railways’ 150th Anniversary.

Most of the running on this boiler ticket was done on heritage lines, where 3717 spent most of the time at Gloucestershire Warwickshire Steam Railway. Tube leaks occurred 2011 but repaired, then appeared again in 2013 which saw the engine withdrawn from service. Initial plans were to repair the issue but on further inspection, the problems proved to be serious, with “City of Truro” now a static display at the Swindon Steam Museum.

We hope you have enjoyed this week’s Sole Survivor. Stay tuned for the next Lost Class series article coming out soon.