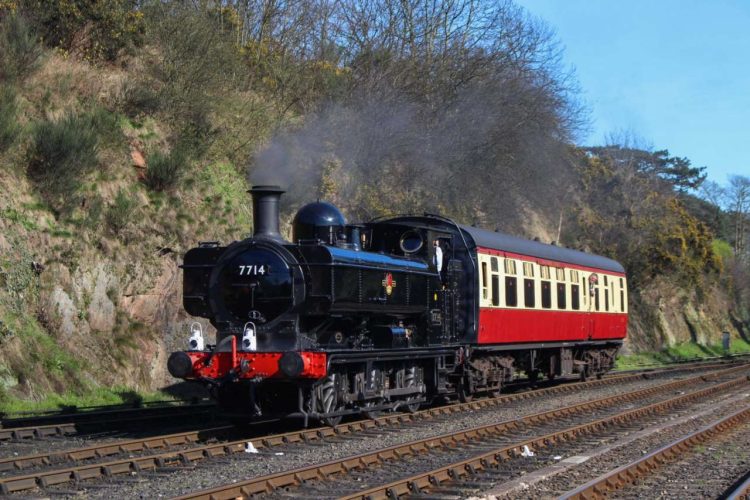 The Pontypool and Blaenavon Railway has confirmed that GWR Pannier Tank No. 7714 will be visiting the railway for its Annual Steam Gala in September.

7714 is visiting from the Severn Valley Railway, and will be one of the main attractions of the gala, which takes place from Friday 9th to Sunday 11th September.

Built in 1930, 7714 was one of 863 Collett 5700 Class Pannier Tank engines and spent most of its working life at Birkenhead. It was withdrawn from main line duties in 1959 after clocking up over half a million miles in service and sold to the National Coal Board for further use at Penallta Colliery near Ystrad Mynach in the county of Glamorgan, which is just ten miles away from Blaenavon as the crow flies. In 1973 it entered life in preservation at the Severn Valley Railway.

The Annual Steam Gala will see an extensive timetable in operation using all available locomotives with trains running each day from 10.30 to 4.30. There will be demonstration freight services and Saturday evening runs, including a Fish and Chip Special and a sunset beer excursion. The buffet car on the main carriage set will be open serving local Rhymney Brewery ales and Hallet’s cider, and both the railway’s Great Western Railway Saloons will be in traffic.

As well as 7714, Austerity 0-6-0 saddle tank 3839 Wimblebury built by Hunslet will be visiting courtesy of the Foxfield Railway. It is yet to haul its first passenger trains in preservation. There will also be a third guest locomotive, which will be to be announced on Friday, 5th August.

The railway’s own locomotives that will be running include:

To find out more about the gala visit https://www.bhrailway.co.uk/annual-steam-gala!