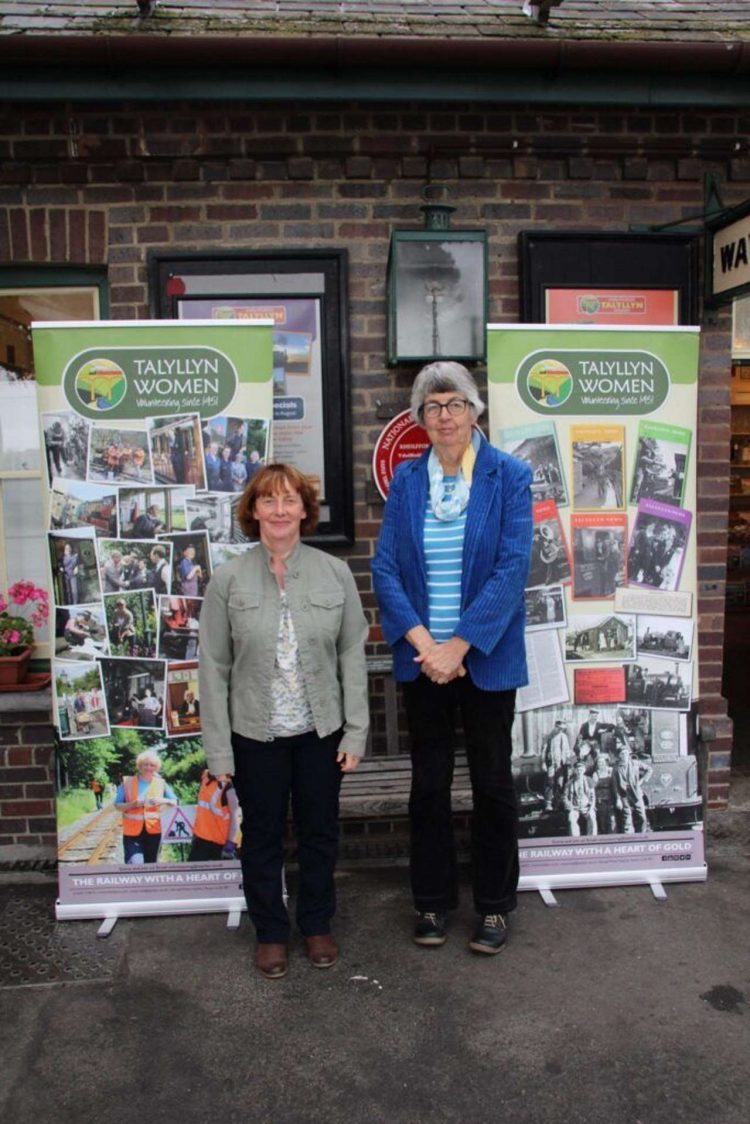 Sarah and Barbara in front of the Talyllyn Women pop up banners. Credit: Graham Thomas.

A special train has run on the Talyllyn Railway to recognise the contribution made by female volunteers since 1951.

The Talyllyn Railway differs from a good number of heritage railways due to having a large proportion of female volunteers in all of its departments and has been this way since the railway preservation movement began back in 1951.

Back in the early days of the railway, Sonia Rolt helped to run the Wharf office alongside Barbara Curwen who worked as a guard for the first two years. Wives of many other members also supported the railway taking on work such as painting, cleaning and serving drinks.

Today approximately 25% of the heritage railways loco department grade holders are women and regularly see trains crewed at both ends by women alongside Controllers, Blockmen and Stations Assistants, it is most likely that both engine and carriages have been painted and are maintained by female volunteers.

The railway, which is making a strong come back after the pandemic, came up with the idea to celebrate female volunteers following two volunteers discussing how long they had worked at the railway. Barbara and Sarah realised they had both served 50 years as volunteers at the Talyllyn Railway in a number of capacities and this led them to consider how many years other women had contributed which is definitely something to celebrate and of course, the celebration could only take place by train!

On the 30th of July, a train full of #TalyllynWomen made their way up the valley for cakes and celebrations at Abergynolwyn. The locomotive was also crewed by Rachel and Christine who were the first to run an all-woman loco crew for the Railway back in 1995. The train guard was Louisa who started at the railway in 1975 and became a fully qualified guard in 1985.

Tea and Prosecco were served when the special guests arrived at Abergynolywn alongside a huge photographic display of the railway’s female volunteers across all departments over the years which brought back some fantastic memories.

Sarah and Barbara gave a welcome speech covering the interesting history of how they came to be Talyllyn volunteers. It took a good while for women to be accepted as volunteers on the footplate and also on the Guard’s van, as these were regarded as male domains. The women would have in many ways had to perform better than their male peers in order to prove themselves competent with some male volunteers actually saying they came to Tywyn to get away from women!

Ann Hatherill who was the first lady fireman back in 1957 was sadly not able to attend as she had hoped but did send her very best wishes to everyone. Following Ann’s example, women are now featured in all departments of the railway as steam and diesel drivers, firemen, loco cleaners, traffic inspectors, guards, blockmen, controllers, booking clerks, council and board members, locomotive roster clerks, track maintenance, loco and carriage working parties, painters, hedge layers as well as gardening, museum work, shop and catering, area groups, Tracksiders, Navvies, railway postal service, IT, marketing, history research alongside many hours doing behind the scene roles.

Following the speeches, a glass was raised to the incredible Talyllyn women both past and present. ‘Happy Birthday’ was also sung to volunteer Diana who celebrated a very special birthday earlier in the year before enjoying delicious cakes and catching up with fellow volunteers.

Ahead of the event, both Sarah and Barbara asked female volunteers how many years they had worked on the railway with the hope of achieving 1,000 volunteer years. The target was smashed as the total saw more than 1,300 volunteer years submitted and 1,100 Volunteer years were represented by guests onboard the celebratory train. Further to this volunteers were asked to apply for Long Service Awards with Eileen Jones, Mayor of Tywyn presenting the awards at the event which saw Barbara and Sarah’s 50 years of volunteering celebrated.

All women attending the celebration received an enamel ‘Talyllyn Women’ badge and ahead of catching the train home, a photo opportunity saw around 60 women at the event take part. The idea to celebrate the work of female volunteers in rail preservation was a great success and it can be said that Tallylyn Railway truly laid the tracks and leads the way for women volunteering in the heritage rail world.

“From 1951, ladies were volunteering. Originally mainly wives and girlfriends of male members, women then began joining in their own right and this event shows how they have progressed throughout both the operating side of the TR and also in many ‘behind the scenes jobs. They bring a wide range of experience and are vital and valuable contributors. The TRPS owes a debt of gratitude to all the women who play such an essential role in keeping the Railway and Society running.

“Thank you to all Talyllyn Women, past, present and future.” 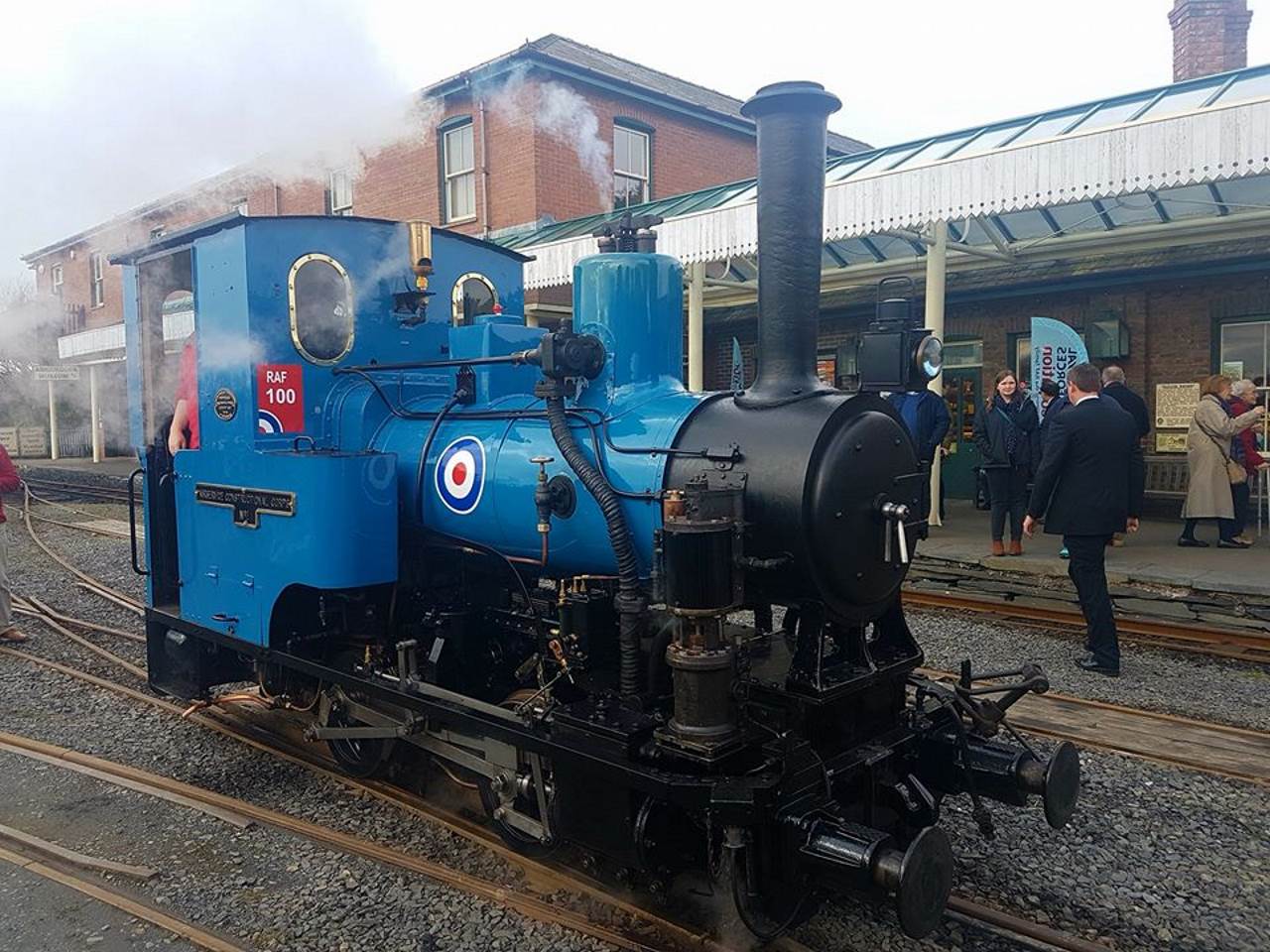 The Talyllyn Railway has reported strong trading figures for 2021 with healthy visitor numbers and revenue close to...