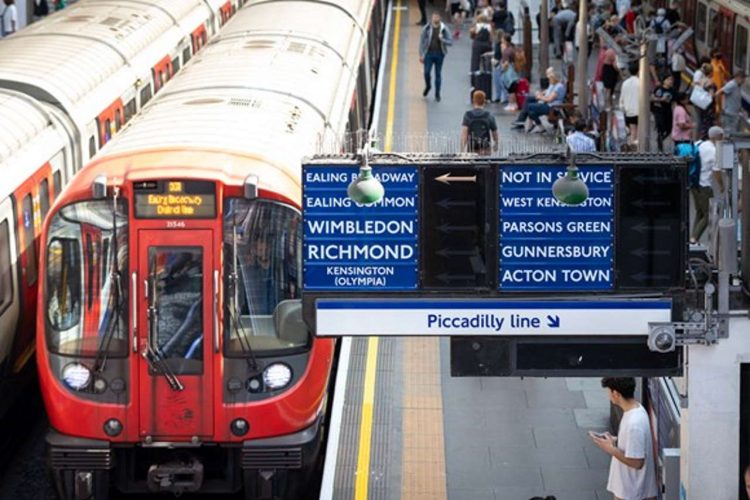 Dating back to 1905, the lightboxes show the destination of the next District line train on each of its four platforms which an illuminated arrow points out. Engineers have spent 16 months lovingly restoring the pieces of railway history, connecting them to the modern signalling system which will provide the artefacts with a purpose in the daily operation of Earls Court station into the future.

The refurbishment process has seen destination plates changed and recreated to the same specification as the earlier ones which are made of vitreous enamel using the same colour with Transport for London commissioned Johnson font.

In order to bring the lightboxes carefully into the 21st century, work was carried out on-site using overnight engineering hours which allowed access to the lightboxes and accommodating space for cables and other hardware without affecting sightlines and familiar features of the station.

The Earl’s Court lightbox restoration comes as part of the Four Lines Modernisation Programme which is undertaking the replacement of old and unreliable infrastructure for the Circle, District, Hammersmith & City and Metropolitan lines with state-of-the-art automatic train control signalling. Without this essential restoration work, the lightboxes would not have worked with the new signalling and would have left customers without an easily visible wayfinding facility for discovering the destination of the next District line train from the platforms. The improvements to the lightboxes now display a ‘first eastbound train this platform’ sign which displays when eastbound trains via Victoria or through central London are expected on both platforms which makes life much easier for passengers making their way to the quickest trains.

Edmund Bird, TfL Heritage Manager, said: “The Earl’s Court’s lightboxes are significant historic features of the District line we have retained and brought into modern-day standards as part of the Four Lines Modernisation project. While we work hard to bring the District line’s signalling to the standards seen on the Victoria, Northern and Jubilee lines, we are constantly considering how to maintain the railway’s heritage that makes London Underground so globally renowned. It was a brilliant experience to be part of the team who restored these historic assets and I’m glad that they will still be functioning for decades to come, helping our customers get around.”

Opening in 1871, Earl’s Court station was designated as a Grade II listed building in 1984 due to being of special architectural and historical interest. A key focus has always been on keeping the original heritage features and assets whilst making them suitable and compliant with regulations and requirements of the modern railway. Earl’s Court was the very first Tube station to use escalators which were installed in 1911 and was also one of the first stations to operate electrified train services from the 1st of July 1905. The new electric signalling system gave each train the ability to be identified ahead and enabled the introduction of the lightboxes during the same year.

Transport for London operated the world’s very first underground railway and is very aware of its responsibility in keeping artefacts for the public as a visual reference to the history of the network whilst running a reliable service which is fit for modern day.