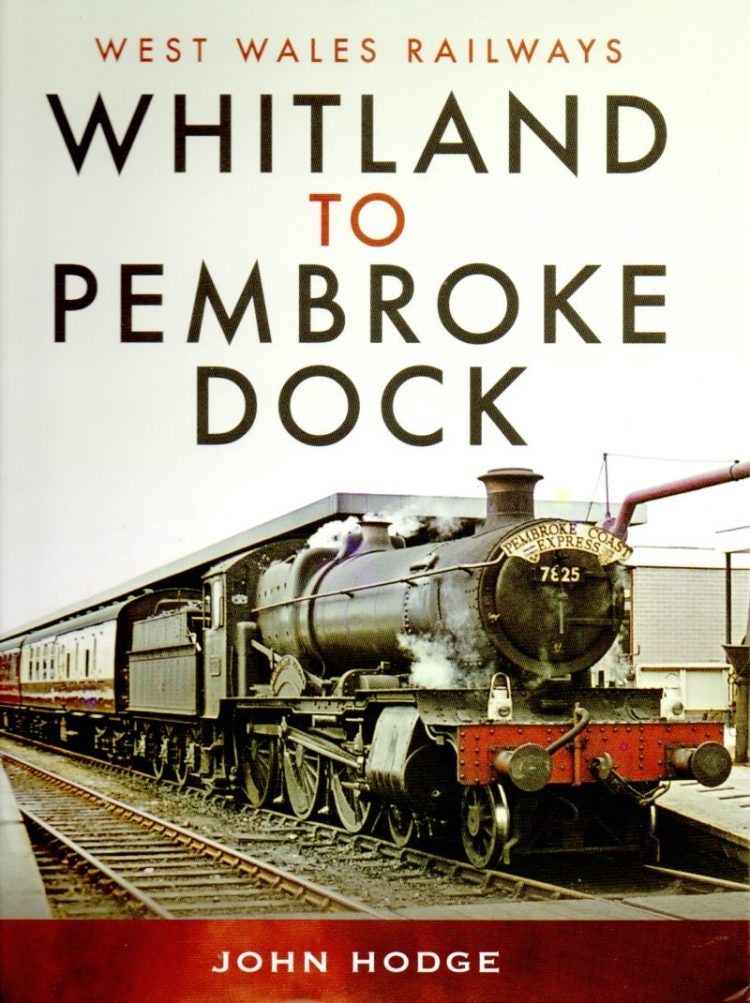 Newly published on 22nd April this year, Whitland to Pembroke Dock is the latest book in the West Wales Railways series from publishers Pen & Sword.

This volume covers the section from Whitland to Pembroke Dock, a largely agricultural and holiday line, centred on Tenby and Pembroke. The line was worked by Whitland depot which was a steam sub-shed of Neyland, and had its own allocation almost entirely of tank engines.

Written by former railwayman John Hodge who was born in Barry, the hardback book measures around 28.6 cm x 22.4 cm, is 128 pages long, and has 27 colour and 270 black and white illustrations. It has a published price of £25, and at the time of writing it can be obtained online from Pen & Sword for £17.50 (currently on a 30% off) and from Amazon for £17.99. The quality of the finished product is impeccable.

RailAdvent Plus members can gain 25% off in Pen and Swords online store. Not yet a member? Click here to instantly gain the discounts.

The book depicts the transformation of the railways between Whitland and Pembroke Dock between the early 1950s to the mid-1970s, during the era when the railways across Britain were being dramatically reduced. There are also a few historical photographs.

Whitland was an important junction, with branches for the closed line to Cardigan, the still-open line to Fishguard, and branches to Milford Haven, Neyland, and Pembroke Dock. The branch to Pembroke Dock is 27 miles long and originally had 13 stations and halts, of which ten are still open.

The preliminary pages include a useful map depicting the location of each station, followed by an introduction giving a brief history of the line. Confusingly, the author has presented the map in landscape format, whereas its size would easily fit within the portrait presentation of the rest of the book.

A summary of each station’s history and infrastructure follow in what the author calls “Location Analysis”, as well as a detailed look at the engine shed at Whitland, including a summary of loco allocations from 1901 until its closure in 1963.

It quickly becomes clear that tank engines, particularly Prairie tanks with a 2-6-2 wheel arrangement were the mainstay of the line’s motive power, supplemented by a few 2251, 4300, and Manor class tender engines. In later years these were replaced by HSTs , which look out of place in the very rural character of the line.

The author has included a fine selection of photographs that capture the line’s features, including the stations, signal boxes, and tunnels. Along with images depicting the railway and trains through the period, there is a discussion of the decline in freight traffic in the 1970s and how the traffic on the railways between Whitland and Pembroke Dock is now mainly passenger.

A minor criticism is that the heading on each page details the book’s title instead of the more reader-friendly chapter title. This is seen in the pages below, which show the first of ten pages devoted to Narberth. The middle photo on the right shows the entrance to Narberth Tunnel, but its location is not shown on the map.

Here we see a couple of pages devoted to Tenby, although once again it would be useful if the chapter title was in the heading rather than the book title. I assume the double-headed Prairie was a positioning move, unless it was extra motive power for the last leg of the Pembroke Coast Express.

Compared with the previous pages showing trains hauled by Prairie tanks, these modern image scenes show what could be termed “super power” for the branch. The author is to be congratulated for including such photos to bring the line’s story into the 21st century.

In summary, this is a book full of nostalgia for lovers of GWR branch lines. The author has managed to leave the reader feeling that they have experienced the Whitland to Pembroke Dock branch, even if they have not travelled on it. Descriptions are detailed enough to give an appreciation of each station, without overwhelming the reader with mundane details. We would highly recommended this book to anyone with an interest in rail or local history.

This is a book full of nostalgia for lovers of GWR branch lines. The author has managed to leave the reader feeling that they have experienced the Whitland to Pembroke Dock branch, even if they have not travelled on it. Highly recommended. This book is about the author’s efforts to build a model railway layout in his garden. It is...