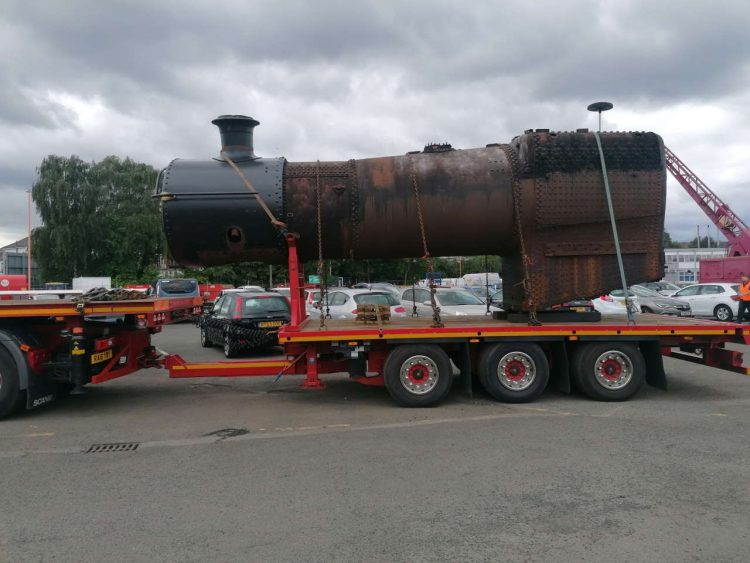 Another milestone has been reached in the construction of GWR County Class No. 3840 County of Montgomery when the locomotive’s boiler and tender chassis were moved from Didcot Railway Centre to Tyseley Locomotive Works.

Both the boiler and tender have been donated to the Churchward County Trust by the Great Western Society (GWS), which removed the Standard No. 4 boiler from donor 2-8-0T No. 5227 a few days before the transfer to Tyseley. The entire operation was coordinated by the GWS.

The move took place on Monday, 4th and Tuesday, 5th July. The first item to reach Tyseley was the Churchward 3,500-gallon tender chassis on 4th July, followed the next day by the boiler. A full preliminary inspection of the boiler is expected to take place in due course, but early indications are encouraging.

In the meantime, the Churchward County Trust is looking for volunteers who would like to get involved with the project in a ‘hands-on’ way, such as helping to clean up the boiler and tender and undertaking lighter engineering work on-site at Tyseley. Anyone interested should contact the Trust’s Engineering Liaison, David Bradshaw, at [email protected]

“Getting the boiler and tender to Tyseley was vitally important as they can now be prepared for inspection, which in turn will dictate future work programmes and fund-raising activities. It also provides an opportunity for supporters to volunteer with the project; something we’ve been keen to offer since we started.

“Furthermore, being able to refer to the boiler as No. 3840’s rather than No. 5227’s is a great psychological boost. However, we are under no illusions about how much work the boiler will require to make it fit for service again; decades spent in the open air at Barry Scrapyard will have undoubtedly taken its toll on the barrels.”

You can find out more about the project and how you can help over on their website. The festive tour will take place on Saturday the 17th of December and will see a loco hauled...