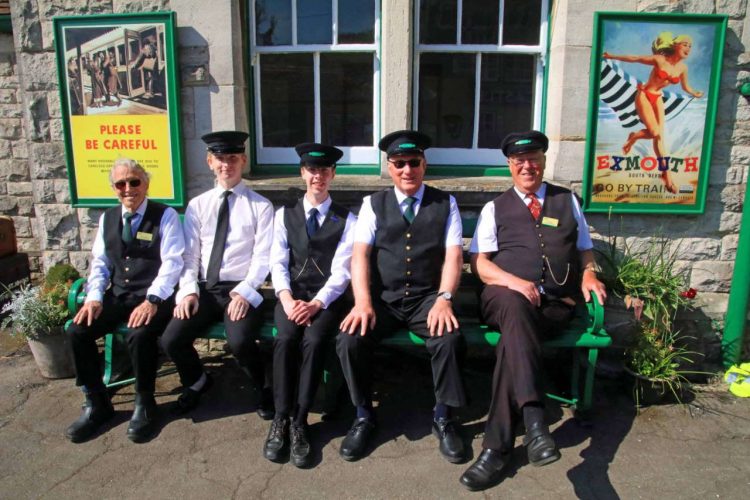 Swanage Railways volunteers are a friendly and dedicated group with a good mix of talents and interests and support one of the Isle of Purbeck’s leading tourist attractions.

Swanage Railway has been built up from the ground since 1976 and following the removal of the tracks for scrap back in 1972 when the ten-mile branch line which ran from Wareham to Corfe Castle and Swanage was controversially closed.

A good variety of volunteering opportunities are available and each is essential to the ongoing operation and upkeep of the award-winning 9.5-mile heritage railway which runs both steam and diesel heritage trains along its 5.5 miles of restored line.

Volunteering opportunities include the Purbeck Mineral and Mining Museum, which is next to Norden station and has been built from nothing over a period of 20 years recording the fascinating history of ball clay mining in the Isle of Purbeck.

Swanage Railway was presented with the Queen’s Award for Voluntary Service by the Duke of Kent in 2018. The award recognised the crucial role that volunteers had played in the rebuild and running of the heritage line for more than 40 years.

The heritage railways 500 volunteer group saves approximately £1.5 million each year in employment costs and means that all profits made via train and retail operations can be put straight back into the line which is managed by the registered charity, the Swanage Railway Trust.

“Our dedicated volunteers are the lifeblood of the Swanage Railway and without them, our ward-winning heritage line through the beautiful Isle of Purbeck would be unable to operate.

“People don’t have to be railway enthusiasts to volunteer on the Swanage Railway as there are many jobs that do not involve the running of the railway. Some volunteers do several days a week and others just one, it all depends on what suits them and what they want to do.

“The Swanage Railway is a vibrant and rewarding community project in the beautiful Isle of Purbeck which is a protected Area of Outstanding Natural Beauty and on the internationally recognised Jurassic coast.

“As well as helping to operate our heritage train service, there are a host of other roles that our volunteers carry out – including booking clerks, ticket inspectors, permanent way workers who maintain the tracks, signalling technicians, telephone and radio technicians as well as maintenance workers who keep our listed buildings in good repair.

“We also have a dedicated team of volunteers who restore and repair our historic heritage carriages, our museum staff at Corfe Castle station as well as the Purbeck Mineral and Mining Museum next to Norden station, our shop at Swanage station and our catering staff who work on our popular dining trains and in our three-station catering outlets.

“Whatever people want to do on the Swanage Railway, we will give them the necessary training and support. They will be joining a group of dedicated and committed people who help to make the Swanage Railway one of Purbeck’s foremost tourist attractions.

“We always need new volunteers to come forward as the Swanage Railway develops and improves still further and because our existing volunteers are growing older – some retiring or moving on for professional, personal or family reasons,” explained Randy who lives in the north Dorset town of Gillingham.