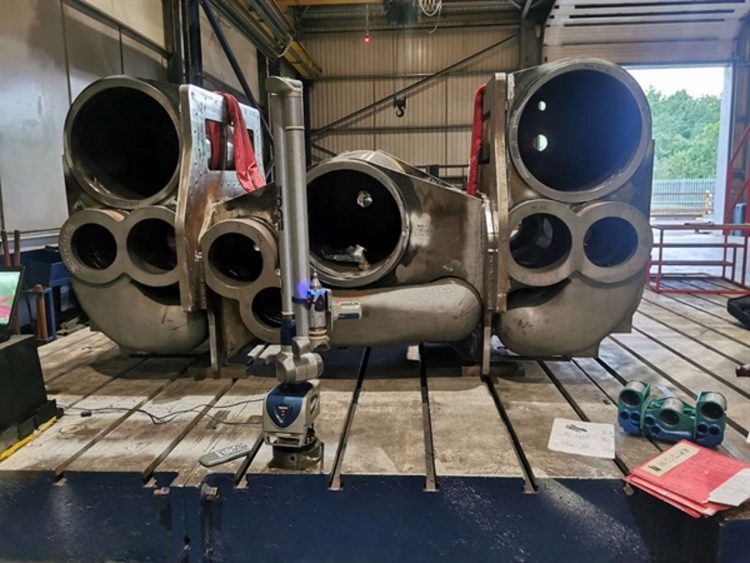 The A1 Steam Locomotive Trust has announced that a significant milestone has been reached in the construction of the cylinder block for P2 locomotive No. 2007 Prince of Wales.

For the very first time, all three cylinders have been placed together to check their alignment and to ensure preparations are complete for the welding together to create a Monobloc.

The cylinder block for 2007 has been fabricated in three sections – a centre cylinder and two outside cylinders.

The Monobloc was strapped together to allow the dimensions to be measured with a Faro arm.

Then, the three cylinders were then tack welded together to create the first Monobloc since the 1940s and will weigh around 5 tons when complete.

The next step for the construction is a two-week-long welding process, followed by up to two weeks of being stress relieved.

The A1SLT says that not only is it important for the method to be proved for the P2, but the next new build project for the Trust, the V4, will also require a fabricated monobloc cylinder.

The trust also said that the same method of working could be used on other heritage locomotives, such as V2 4771 Green Arrow.

Fundraising for the P2 is ongoing – and you can find out how to support the P2 project here.

Members of The Monobloc Club have been invited to visit Howco to see the Monobloc immediately after the welding has been completed. The P2 Project has released the latest update on progress to build a new class P2 2-8-2 Mikado,...