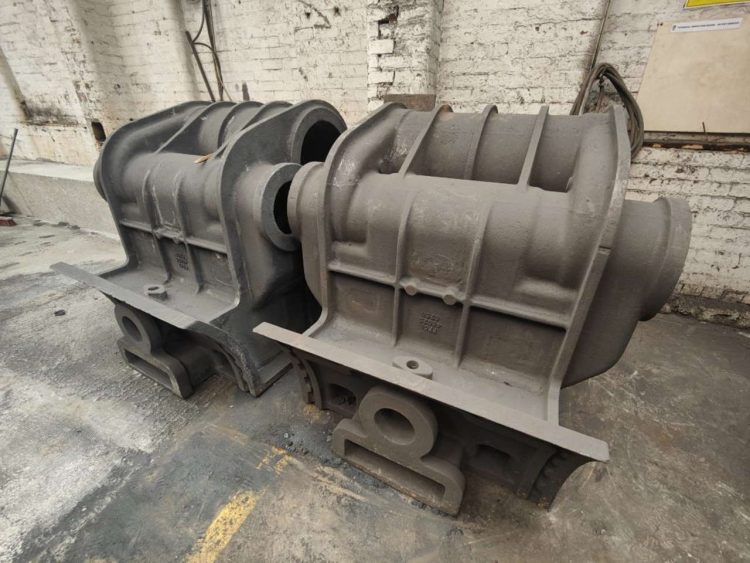 Churchward County Trust (CCT) appeal has revealed that a second cylinder for No. 3840 County of Montgomery has now been cast

The second cylinder has been successfully cast by Hargreaves Foundry in Halifax after the locomotive’s first cylinder was cast back in autumn 2021.

The pouring for the second 18in x 30in cylinder took place in mid-April using a sacrificial polystyrene pattern which was created by specialist patternmaker, Premier Patterns from designs by CCT Design Engineer, Elliot Powick. Once the cylinder was cooled and cleaned, it underwent inspection on behalf of CCT during May with the cast receiving a seal of approval.

Over the last few years, polystyrene patterns have been effectively used to cast a number of replacement GWR cylinders and No. 3840 marks the first GWR cylinders with inside steam pipes to use this method.

Roach Precision Engineering in Brierley Hill will now naturally de-stress both cylinders over a period of six to nine months and following this will be machined in tandem is No. 3840’s extension frames which are already on site.

Funding for both the patterns and casting has been achieved so far via CCT’s Cylinders Club, which aims to raise the £40,000 needed to cast and machine County of Montgomery’s cylinders of which half has been met! CCT is on the lookout for more supporters to join the Club which will enable the machining stage to be completed.

“Having both cylinders successfully cast is a fantastic achievement, and our thanks go to everyone who had supported the Cylinders Club so far. We’re now tantalising close to having the cylinders fitted to No. 3840’s frames at Tyseley, but cannot do so until they have been machined. We still need to raise a further £20,000 to complete this stage, so I invite anyone who can afford to support the project to join the Cylinders Club and help us reach our £40,000 target.

“With the locomotive’s boiler soon to move to Tyseley, the coupled wheels currently being machined and all steelwork for the running plates, splashers and cab now on order, the prospect of seeing a ‘County’ 4-4-0 is just around the corner.”

Names of all Cylinder Club members will be added to a ballot and the winner will receive a cast brass replica of County of Montgomery’s cab side number plate.

To find out more about Cylinders Club, please visit their website here, or write to: