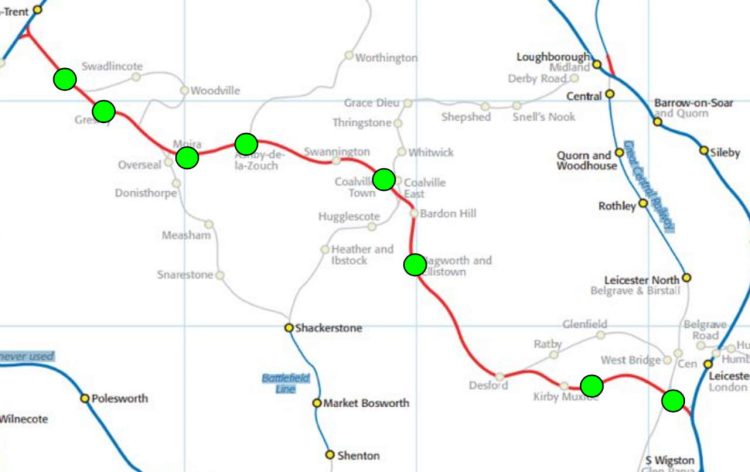 Rail Minister Wendy Morton reveals that the reopening of the Ivanhoe line for passenger services has received approval to move on to the next stage.

The Rail Minister announced her support for 10 proposals which could see closed passenger lines reopen in England, one of which is the railway from Burton to Leicester which was put forward by The Campaign to Reopen the Ivanhoe Line (CRIL).

Network Rail will be providing funding to support the next stage of development work alongside CRIL and will be released in stages as the work is assessed and as it moves forward, supporting decisions for ongoing development and creating a full Outline Business Case with the decision to proceed with implementation.

The Department for Transport will work alongside CRIL and Network Rail as the scheme progresses and are in touch with Douglas McLay and Bruce Wakely of CRIL in regard to the next stages.

“The Department’s assessment considered the strategic and economic case presented, deliverability of the scheme and infrastructure requirements, with a focus on the transport issue and strength of the case
for intervention. This scheme presents significant potential to improve connectivity for communities along the route of the Ivanhoe Line and I look forward to seeing it progress.”

“We are delighted with this announcement which brings the re-opening of the Ivanhoe Line much closer. Passenger services on the Line would provide real value for the relatively modest government investment needed. The reopening of this railway would give a real boost to the often forgotten populations of South Derbyshire and Northwest Leicestershire. We look forward to working closely with the Department for Transport and Network Rail to deliver a railway service which meets the needs of local people”

CRIL was created by the late Geoff Bushell in 2019, who tirelessly raised awareness and support in a bid to see the reopening of the Ivanhoe Line. Geoff gained public support for all nine first and second-tier local authorities on the line alongside all local MPs who all support the campaign.