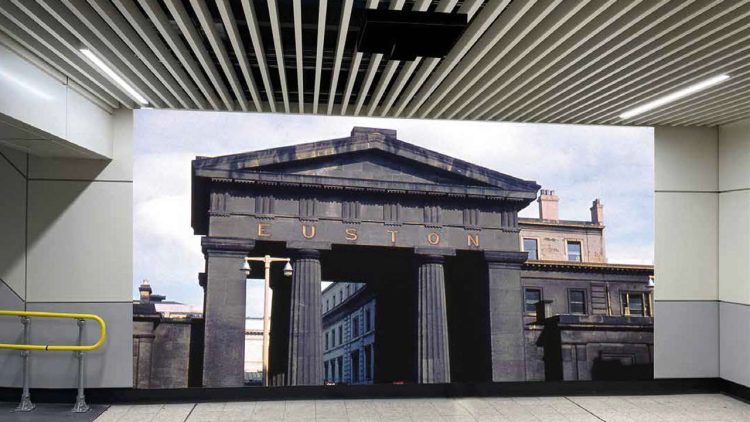 The long-lost iconic Doric arch at London’s Euston Station has been re-created on a projection screen and vinyl graphics to show passengers what it originally looked like.

Network Rail was awarded a grant from the Railway Heritage Trust to create a reminder of the arch near where it originally stood, which was deep in the bowels of the current station.

It is often thought that the arch was beside the two lodge buildings that still exist on Euston Road. However, it was behind the current departure boards on the main concourse, where the newly refurbished ramp to platforms 8-11 is now.

London Euston was the world’s first terminus station. It opened in 1837 as the terminus for the London & Birmingham Railway.

Philip Hardwick designed the arch for the London & Birmingham Railway in the classical Greek Doric style with four columns made from Yorkshire stone.

When British Rail embarked on its electrification of the West Coast main line in 1959, the arch in the middle of where a new modern and much bigger station needed to be built.

Despite great outcry and protests from architects and heritage groups, the arch was demolished along with the rest of the Victorian station in 1961-62. The existing station was opened by Queen Elizabeth II on 14 October 1968.

“I hope passengers will enjoy this new art installation which creates an important link to the past and will inspire people to learn more about the fascinating history of Euston and its integral part in railway history.

“Now in the 21st century Euston is once again at the centre of the railway’s future with HS2, Britain’s new zero-carbon inter-city railway being built. I’m proud that 185 years since Euston first opened – this installation now reminds people where the story started.”

“The decision to demolish the Euston Arch totally, rather than relocate it as originally proposed, was one of the greatest mistakes of 1950’s and 60’s railway architecture, although happily its sister structure at Birmingham still shows us its style and size. The RHT is delighted to have been able to propose and fund this scheme, which both shows clearly where the arch was located, and commemorates a great structure.

“We thank Network Rail for including this in its scheme to improve access to platforms 8-11, and are delighted that its completion coincides with Her Majesty Queen Elizabeth’s Platinum Jubilee, given that the original station Arch was opened within a couple of weeks of Queen Victoria’s accession.”

London Euston and the Doric Arch also featured in our recent book review, The London and Northwestern Railway