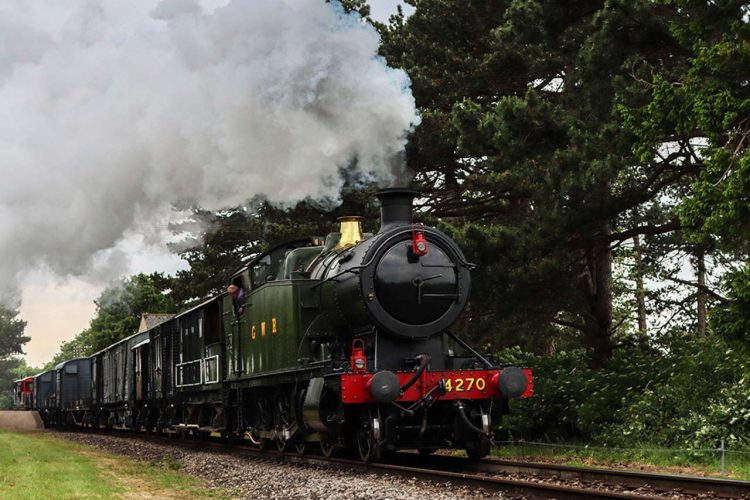 A GWR heavy freight locomotive will star at the North Norfolk Railway (NNR) for its Bank Holiday Steam Gala during the August Bank Holiday.

4270 visits the North Norfolk Railway after a successful visit of 92203 Black Prince to the GWSR in June for their Cotswold Festival of Steam.

The gala will operate to a special intensive timetable and feature a varied schedule of passenger services, including double-heading, non-stop expresses, local workings, and demonstration goods trips.

4270 was built at the GWR’s Swindon Works in 1919 to handle heavy goods trains in the coalfields of South Wales, where it continued to work until withdrawal in 1962. It then languished for over two decades at the Woodham Brothers’ scrapyard at Barry but was rescued in the mid-eighties. Restoration was a protracted affair until 4270 finally returned to service in 2014. The locomotive is owned by Locomotive Services Limited and is based at the Gloucestershire Warwickshire Railway.

4270 will be joined by the NNR’s five working tender locomotives, including:

The line is also hoping to secure a second visiting locomotive for event.

The line’s varied collection of rolling stock will also be showcased at the gala. A train of unique four- and six-wheeled carriages dating from Victorian times will be running along with the unique “Quad-Art” set.

LNER teak-bodied articulated carriages dating from the 1920s will also be in operation. These have been out of service for the first half of this season receiving periodic maintenance. This has included revarnishing all four carriages and specialist reprofiling of the wheels using a state-of-the-art mobile wheel lathe.

A four-car suburban set will also be amongst the carriages in use, as well as two sets in 1950s and 60s livery which will include onboard catering from the art-deco Gresley bar car or a Mk.I buffet.

One, two, and three-day rover tickets are available for the gala, and trains will run from approximately 9.00 am to 6.00 pm on Friday and Saturday and until 5.00 pm on Sunday. One day tickets are £22.50 when booked in advance, two days of unlimited travel is £40.00, and the full three days cost £55.00. Full details can be found at www.nnrailway.co.uk.,

Commercial Manager, Graham Hukins, commented: “The event will serve up one of the intensive timetables full of variety that has come to characterise our galas. There’s a chance to ride behind several different locomotives and experience steam train travel from Victorian times to the 1960s and our stations afford passengers with excellent photographic opportunities too. We are looking forward to welcoming 4270 and giving visitors the unusual opportunity to see a Great Western tank engine on East Anglian metals.”