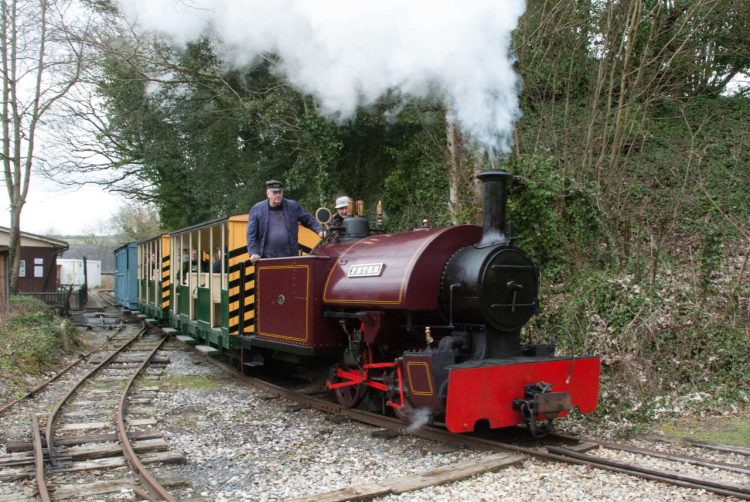 Amberley Museum in West Sussex plans to celebrate the return to steam of 0-4-0ST Peter at its Gala Weekend on Saturday, 23rd and Sunday, 24th July.

Volunteers are now completing the overhaul of Bagnall 0-4-0ST locomotive Peter and firm plans are in place for its return to service officially at the museum’s Railway Gala Weekend on Saturday, 23rd July. The Museum is located next to Amberley railway station near Arundel.

Peter will haul one of the passenger trains all weekend. During the Saturday afternoon, a ceremonial banner will be cut.

The locomotive has undergone its 10-year overhaul of the boiler, which includes fitting a new barrel, front tube plate and new tubes, and a complete re-studding of the boiler. The regulator and mechanical parts have also had a complete overhaul, and it has been completely repainted.

This year, Polar Bear, the museum’s Groudle Glen Bagnall locomotive, reaches the end of its 10-year ticket. The gala will be the last chance for a while to see both Amberley steam locos running together. Polar Bear is very popular with museum visitors, especially younger ones, probably because of its bright yellow paint.

During the gala, the museum’s collection of narrow-gauge locomotives will also be in action on passenger and demonstration industrial trains. In the Railway Hall, there will be a model railway exhibition where local railway modellers and traders will demonstrate their model layouts and modelling techniques. There will also be trade stands selling books, kits, and other transport-related collectables.

The Museum’s RAF Fauld bogie coach has also received a lot of attention. This includes new wheelsets funded by the Sussex Industrial Archaeology Society (SIAS) and supplied by Alan Keef; the cost of an external repaint has been included in this work. A plaque acknowledging their assistance with this project will be unveiled on the Saturday by a representative from the SIAS.

“The carriage looks resplendent and a credit to all involved, Museum volunteers and contractors. Once back in service, it will give wheelchair users and other mobility-impaired visitors easier access to the train for a trip on the Museum’s railway.”

Tickets for the gala can be booked online on their website here https://www.amberleymuseum.co.uk/whats-on/rail-gala/

The museum is located in the heart of the South Downs National Park and has over 20 exhibition areas. These cover everything from vintage vehicles to communications to electrical goods to crafts and nature trails to rides on a narrow-gauge railway and historic buses. The Museum is open to the public from Wednesday to Sunday 10 am to 4:30 pm all year round.