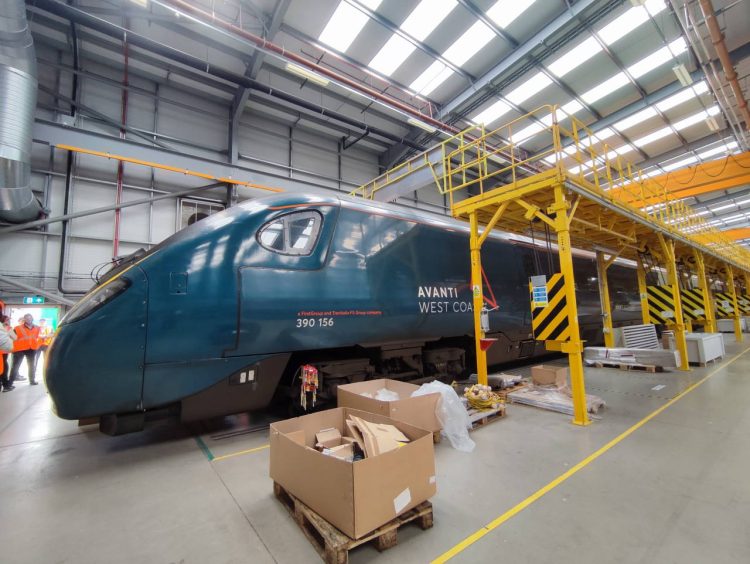 After a quick meeting and safety briefing, we were taken to the workshop floor where we saw 390156 being stripped of its old parts.

Work on the first Pendolino (390125) to be refurbished started in June 2021 and took 30 weeks to complete, re-entering service in April 2022. During this time, the whole refurbishment process was refined and documented, ready for the bulk refurbishment to commence.

With 1,372 tasks from start to finish, the Alstom team are hoping, with the help of night shifts, they can get the refurbishment project down to 2 weeks per Pendolino.

The whole set of 390156 is being progressed in the Workshop with staff working to strip the interior of its carpets, lights, and even taking the roof off (more on that later).

We were taken through the train to see the work taking place. We met a few workers who explained that they were taking out the seats, tables, doors and the panels with reservation screens.

Speaking of seats and tables – Avanti West Coast says that in total 4900 new tables are needed for the refurbishment programme – with the tip accessible tables still featuring.

The wall panels with the reservation screens and lights will remain exactly the same, with the lights being upgraded to LEDs throughout.

Moving through the train, a waft of glue came through the carriage and we knew we were getting close to the ‘carpeting’ stage. As I’m sure you can understand, we weren’t allowed in the carriage with the carpet going down. However, we were told that 11.5km of Axminster carpet is being used in the entire project.

Shoe covers on and we were allowed in. The tables are still to be fitted here in standard class, but we can finally get a look at what all the work culminates to.

The seats we saw earlier have been refurbished, with new seat cushions and moquette.

The seat frame remains the same, with a the seats graded in a traffic light system and are then reused in other Pendolinos.

We were then taken down to the new shop. Remember how we mentioned the roof was removed from 390156.

Well, the shop is made up of heavy components and the easiest way to remove the old shop and put the new one in is through the roof.

With the tour of 156 complete, it brought our visit to Alstom to a close. Alstom and Avanti West Coast provided us lunch before the journey home began.

We also have some video footage of the visit, which is currently being edited and will be published on the RailAdvent website soon.

Do you have any questions regarding the refurbishment programme? Put them down in the comments and we will get them answered. Network Rail's essential upgrade works carried out over the Early May Bank holiday between London Euston, the Midlands...