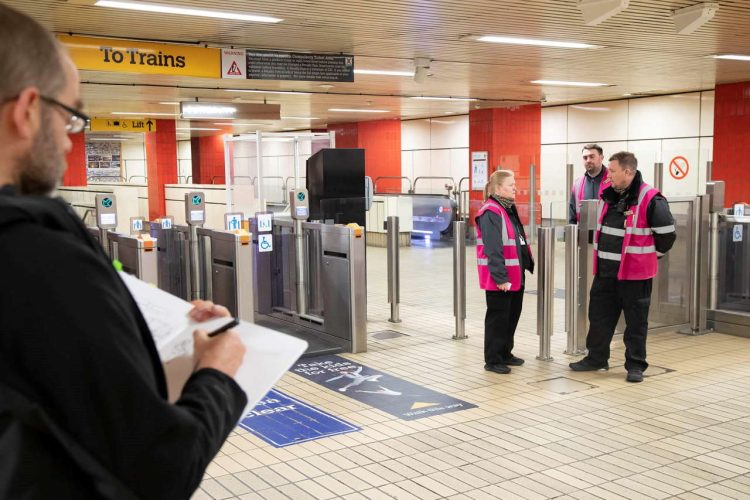 The stylised comic book will be made to recognise the incredible work the frontline staff of the Tyne and Wear Metro undertake each day.

Artist and local Mike Ducket will be illustrating the 40-page comic which will celebrate the ‘everyday superheroes’ who work in customer service and revenue protection roles for Metro.

Coming from Bardon Mill in Northumberland, Mike is an illustrator and his work will tell the stories through the medium of comic art on behalf of Metro’s frontline staff, revealing how they look after customers, challenge ticketless travel and offer a reassuring presence at stations and onboard trains. Mike will use the medium of comic book art and take inspiration from the iconic artwork of Marvel and DC comics.

The colourful project is part of the big Metro Community Takeover and will see Mike travelling throughout the rail network to meet some of Metro’s 120 customer service advisors during their daily work, which will bring inspiration and allow him to really bring their stories to life.

“Usually you see superheroes like Batman and Spiderman in the pages of comic books, but I want to capture the everyday jobs of frontline Metro workers as they perform their duties – they are the real superheroes.

“The brief I’ve been set is to bring this vital job, and the challenges that it presents, to life through the medium of comic book art.

“The customer services staff on Metro do a brilliant job. I’ve already got know many of them and it’s pretty cool to think that they will be immortalised in the finished comic.

“As an artist this is a great project for me to be involved in. I love comic book art and it’s fantastic to be able to get out there and start sketching ordinary Metro staff while they’re at work.

“They are the going to be the stars in their very own comic, whether that is helping a customer use a ticket machine or helping a person with the gatelines. It’s all part of the everyday that I aim to capture in my drawings.

“The Metro is an iconic transport system and I don’t think it has ever been represented through this type of artwork before. It’s a new and very contemporary way of celebrating the Metro and its staff.

“I’ve already started sketching the comic and I am planning more trips out with my paper and pens before I sit down and get to work on the final draft, which will be published for people to buy and keep.”

A final printed version of ‘Metro Comic Book’ will be created by Mike and will be available to purchase as part of the Metro network’s 40th-anniversary celebrations.

The Metro Takeover programme will also see other significant regional arts organisations carry out community projects and commissions which will be featured at stations throughout the well used urban transit system by Metro’s operators, Nexus.

“Metro has a long tradition of promoting public art but this is the first time we have commissioned comic book art. We are really excited to be showcasing the work of staff through this fascinating and iconic medium.

“Our illustrator Mike Duckett will be visiting locations to across the Metro system to draw the customer service staff and he is then going to put it all together into a real comic book, which we are going to get published as part of the Metro Community Takeover.

“Over the last year Metro has been turned into a platform for community arts and live performances by creative people from across North East England over the coming year as part of the Metro Takeover, our biggest ever community arts programme.

“Creative arts and the barriers it breaks down are a great way to help people reconnect with Metro in their everyday lives.”

From August 2021 and ongoing to spring 2022 Metro has been brought to life with fresh approaches in dance, song, music and visual arts projects with the involvement of people throughout the region and funded via Arts Council England. The heritage railway is launching its 'Bricks & Pieces' appeal which will support them in maintaining its 172-year-old...