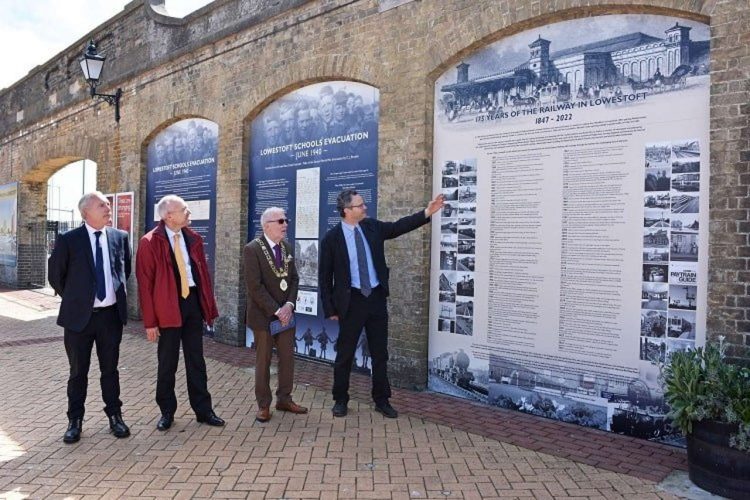 A huge mural has been revealed at Lowestoft railway station to celebrate 175 years since the arrival of the railway in the town.

The mural was unveiled by Waveney MP Peter Aldous and shows a timeline of events since the opening of the Norwich to Lowestoft ‘Wherry Lines’ which originally opened on the 3rd of May 1847.

The murals installation was carried out by Wherry Lines Community Rail Partnership and the Lowestoft Central Project who have been working with Greater Anglia over recent years to significantly rejuvenate and restore the station.

The partnership has seen key initiatives such as the creation of exhibition space within the former parcels office and the opening of a new Tourist Information Office at the station.

The mural details the timeline of numerous changes seen by the line over many years and leads right up to Greater Anglia’s introduction of brand new trains in 2019.

“The arrival of the railway brought enormous growth and prosperity to the town with the expansion of the port and creation of a Victorian resort. 175 years on and the railway still plays an integral role in the town’s economy, enabling greater connectivity for residents and visitors with the railway station itself being situated at the very heart of the community which it serves.”

Greater Anglia’s Head of Corporate Affairs, Jonathan Denby, said, “After 175 years the Norwich – Lowestoft line continues to go from strength to strength, benefiting from the introduction of our high quality, brand new trains; regular and frequent services on both the lines to Norwich and Ipswich and first-rate performance, with punctuality, consistently over 95% all year round. Add in improvements to station facilities and recent re-signalling upgrades and the railway is well placed to continue to serve the community with an excellent service, connecting people to work, social and leisure opportunities.

“We’re grateful for the ongoing support of the Wherry Lines Community Rail Partnership, our amazing team of station adopter volunteers and other local partners in ensuring a bright future for the railways in Lowestoft, providing great connectivity and facilities for the local community.”

Peter Aldous, MP for Waveney, said, “It is important to mark the 175th Anniversary of the railway coming to Lowestoft, as it has played such an important role in the town’s history.

“Special thanks are due to the Community Rail Partnership and the Lowestoft Central Project for their tireless work in renovating and refurbishing the station, which has such an illustrious past, including the welcoming of 500 Kindertransport refugees in 1938 and saying a temporary farewell to 3,000 school-aged evacuees 2 years later.

“It was a privilege to help unveil the timeline recording these and other important milestones over the past 175 years and to look forward to an exciting future.”

Sir Samiel Morton Peto who lived close to Somerleyton Hall purchased Lowestoft Harbour in 1844 and announced plans to build a railway from Reedham. After being granted Parliamentary approval building work got underway in 1846 and saw the line open for goods from the 3rd of May 1847 with passenger services coming into operation just a few months later on the 1st of July

The railway brought significant growth and attracted major industry as well as trading links via the port to Europe. Morton Peto also built a fashionable resort south of the harbour. The route to Norwich was then followed up in 1859 with a line south to Ipswich alongside a direct route to Great Yarmouth in 1903.

Bringing huge prosperity to Lowestoft, the railway provided a network of goods lines moving products from large factories including war rations from the Maconochie canning factory and in later years produce from famous brands such as Morton and the Cooperative Wholesale Society. The railway also established the ability for fish caught in Lowestoft to be delivered in Manchester and London within hours

The station is certainly a great survivor and has made it through serious damage, two World Wars, fire, floods, attempts by the local authority to move the station outside of the town centre and the infamous Beeching Report.

Some examples of the noted historic events that have taken place around the station are:

More recently Greater Anglia brought a brand new fleet of high quality, comfortable, air-conditioned trains which run services from Lowestoft to Ipswich and Norwich, beginning in the summer of 2019.

£60m has also been invested by Network Rail to upgrade signalling and level crossings, alongside creating brand new freight sidings which were used for the first time earlier this year. Greater Anglia is urging people to avoid travelling on its trains on 2nd July, as services will be...