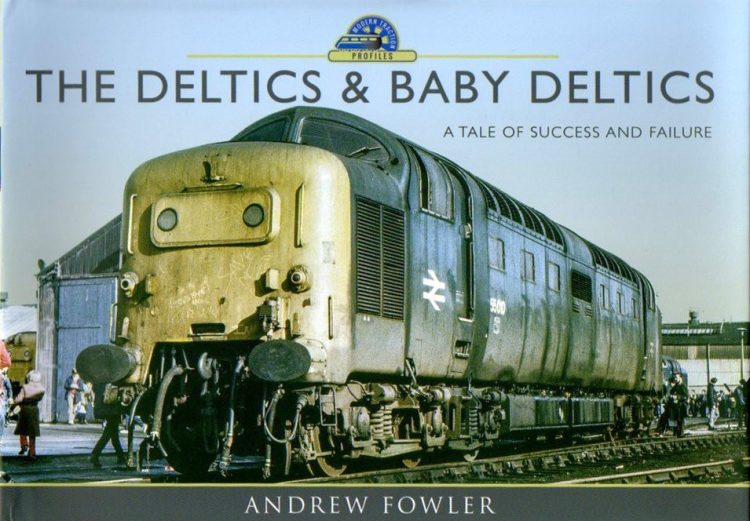 The Deltics and Baby Deltics: A Tale of Success and Failure DEALS

Published in May 2021 as part of a “Modern Traction Profiles” series and being re-released on 30th June, 2022, this book from publishers Pen & Sword provides a detailed history of the much-loved Deltics and their less-memorable sisters, the Baby Deltics.

Written by Andrew Fowler, the hardback book measures around 246 cm x 172 cm, is 200 pages long and has 93 colour & 51 black and white illustrations. It has a published price of £25 although Pen & Sword currently has it on offer at £22.50 (dont forget that RailAdvent Plus members get an extra 25%, or nearly £4 off this price – find out more here), and at the time of writing it can be purchased from Amazon for £20.50.

“The Prelude to the Deltics” is a well-researched description of how the class developed from the early LMS and SR diesels 10000 and 10001, and 10201 to 10203, through to the awe-inspiring prototype with its inspirational colour scheme of powder blue offset by two narrow white body stripes and three head-turning chevrons on each end.

At one time, it looked as though the prototype would come to a premature end, as in 1958 the Midland Region’s Chief Electrical and Mechanical Engineer decided that trials with the loco should end. Fortunately, the Eastern Region stepped in, and the rest is history as the Prototype evolved into a class of 22 very successful workhorses.

“The ‘Baby Deltics”’ is equally well researched, telling their story from why they were introduced without any thought as to whether there was a need for them, through to the Baby Deltic Project which aims to re-create a working member of the class.

“The Production Series Deltics – an introduction” follows the experience gained with the prototype Deltic through its development into the classic locomotive that it became.

“Production Series Deltics” provides a quite detailed description of each loco’s history, together with its current status, whether scrapped or preserved.

Surprisingly, over a quarter of the class are now preserved, as is the propotype Deltic and a cab of two others.
The book is profusely illustrated with multiple photographs of each class member.

For Deltic lovers, I am sure this book deserves a place on their bookshelf. The awe-inspiring prototype with its inspirational colour scheme of powder blue offset by two narrow white body stripes and three head-turning chevrons on each end. For those lucky enough to have seen it on the mainline, it must have seemed a lifetime away from steam locomotives.

During their short life, Kings Cross was home to the Baby Deltics. Here we see D5902 in original condition, with connecting doors and a ladder on the nose.

In two of the class’s regular haunts, 55014 The Duke of Wellington’s Regiment is seen at Hull Paragon and 55015 Tulyar at York. Noticeable on Tulyar are the white cab roofs that adorned some of the class.

In summary, this book covers the Deltics well, starting with the first of the production series, D9000.  Each loco has a quite detailed description of its history, together with its current status – scrapped or preserved. Surprisingly, over a quarter of the class are now preserved, as is the prototype Deltic and a cab of two others. Unfortunately, there is not the same level of detail about the individual Baby Deltics.

The Deltics and Baby Deltics: A Tale of Success and Failure

This book covers The Deltic class in detail and is worth a space on your bookshelf. However, we would have liked to have seen more detail on The Baby Deltics

The Deltics and Baby Deltics: A Tale of Success and Failure DEALS