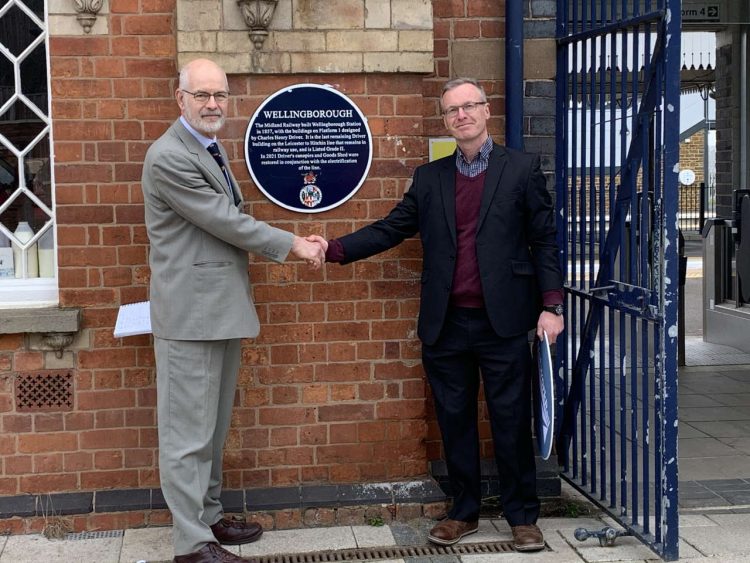 Tuesday the 30th of March saw the plaques revealed following work carried out as part of the Midland Main Line Upgrade.

The work which was undertaken by Network Rail saw the size of the Grade II listed canopies of Kettering and Wellingborough stations reduced in order to accommodate overhead electric wires which will allow for cleaner, greener train services for the stations.

The Railway Heritage Trust has worked closely with the project and has provided funding of £2.5m towards the scheme which saw Network Rail teams lovingly restore many of the canopies’ original features such as finials, columns and roofs.

Wellingborough station has also seen its Grade II listed Goods Shed renovated in order to provide a walkway for passengers on Platform 1.

Network Rail, East Midlands Railway (EMR), Historic England and the Railway Heritage Trust were in attendance at the unveiling of the blue plaques alongside Dr Toby Driver who is the great-great-grandson of Charles Henry Driver, the original designer of Wellingborough station.

“These plaques are testament to the carefully planned work our teams have carried out to restore the historic platform canopies at both Kettering and Wellingborough stations.

“This is part of a range of improvements we’ve made in the last few years to provide a better, more enjoyable experience for passengers in Northamptonshire. I’d like to thank our partners at the Railway Heritage Trust for their expertise, as well as passengers for their support and patience.”

“Recognition by the Railway Heritage Trust of the superb canopy renovation work and other improvements made at Kettering railway station is thoroughly well deserved.

“Kettering has had its railway station since 1857 and now in 2022 its most impressive original features have been lovingly restored whilst the recent electrification of the line and the latest improvements to the timetable mean that Kettering is now better connected than ever and more quickly both north and south. I would like to express my thanks and congratulations to all involved.”

“We’re delighted with the restoration works on the canopies at Kettering and Wellingborough. The Heritage plaques honour the hard work that has been put into both stations throughout the Midland Main Line improvement works over the last few years.

“Our passengers will benefit greatly from the improved station environments at Kettering and Wellingborough, both now and in the future.”

“I have been aware of the wonderful Midland Railway Stations at Kettering and Wellingborough for all of my career, as I started work in BR’s Nottingham office, over 50 years ago. I was delighted to be able to award substantial RHT grant aid, totalling almost £450,000, to ensure that the distinctive canopies at both stations were not only preserved on electrification of the route, but that they were also improved.

“It is a particular pleasure for me that on the last full day of my career we are able to unveil the plaques commemorating the restoration of the heritage features at both stations, and even more so that Dr Toby Driver, great- great-grandson of the original architect for both stations, Charles Henry Driver, is able to join us today to unveil the plaque, and to show us the drawing instruments that were used to design the buildings.”

The work at Kettering follows ongoing station improvements which started in 2019 and saw Network Rail extend platforms 1,2,3 and 4 alongside the installation of lighting, CCTV and public announcement systems.

Wellingborough station has also seen recent improvements such as a new Platform 4, a new waiting shelter, lighting, CCTV and fencing, and the footbridge which has been extended to reach the new platform.