Transport for London announces a major milestone for the project as two Northern line trains use the new tunnels of The Bank branch. 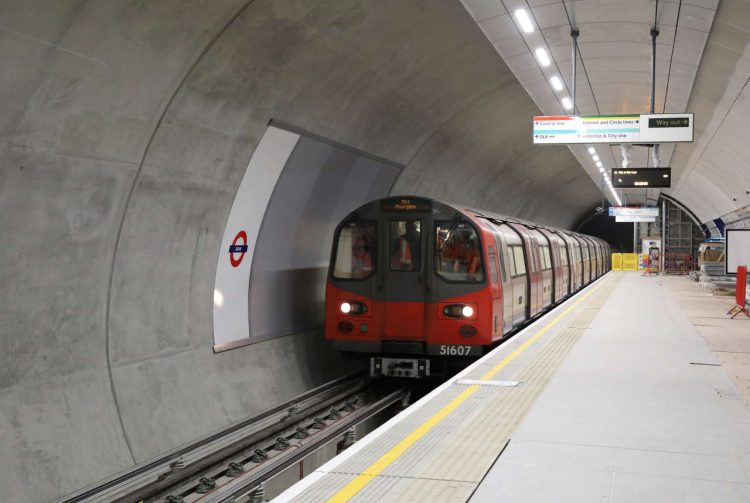 Transport for London (TfL) undertook the landmark stage for the overhaul of Bank station during the Easter weekend period which saw test passenger trains running through the new tunnel for the very first time.

The new southbound running tunnel is over 2km long and was installed as part of the Bank Station Capacity Upgrade which aims to raise capacity of the station by 40%.

The testing saw two passenger trains carry out multiple runs through the new Northern line tunnels and new southbound platform through the Easter break. The period of work gave engineers the chance to check both of the new railway systems alongside the station systems to make certain that the Northern line will be ready for reopening to the public during mid-May.

Once open for service, customers will be able to enjoy a. new, wider southbound Northern line platform and three new passageways which will allow for easier and quicker movement through the station alongside a new spacious concourse.

During the Easter weekend, engineers also undertook the testing of new signalling software and hardware for the new southbound tunnel.

The Bank branch of the Northern line between Kennington and Moorgate closed in mid-January and this major work marks the substantial progress made since then. Following the last update back in March, the TfL project team has completed the final tunnelling ‘tie ins’ that connect the new infrastructure to the current network and installed all of the new tracks alongside platform finishes and station systems.

Over the new few weeks, the project will see the installation and testing of the final station systems whilst preparing station staff by familiarising them with the new layout and systems.

“We have been making great progress in the intricate and complex work that is required below ground at Bank to boost capacity and make it easier to navigate. Having worked on the project for five years, it was a really exciting moment to finally see a train travel through the new section of tunnel. This huge milestone is testament to the hard work of the team. We’re looking forward to reopening the station in mid-May and showing customers the new platform, passageways and concourse – with further improvements to come later this year.”

This huge upgrade project at Bank station will increase its capacity by 40% once finished with further improvements still to be delivered including step-free access to the Northern line and improved access to the DLR platforms. More direct routes for the station and a new station entrance for Cannon Street will also see this station improved further in its location at the heart of London’s financial centre and will address the capacity issues it currently faces once the project completes later in 2022 bringing safer, easier and more reliable travel for passengers.

TfL is reminding customers to keep checking ahead of travelling whilst the Bank branch of the Northern line between Kennington and Moorgate is closed until mid-May, due to the closure other stations through central London are much busier than usual.

Using the TfL websites Journey Planner or via the TfL Go app, customers can check how busy their station is before travelling

To further reduce the impact of the closure on journeys, customers are advised to:

Full travel advice can be found at: http://tfl.gov.uk/northern-line-closure