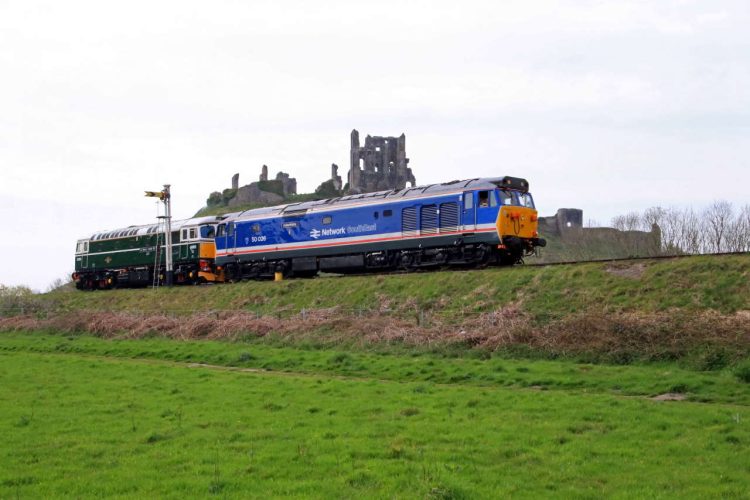 Eight heritage diesel locomotives are to feature in the Swanage Railway’s Diesel Gala and Dorset Beer Festival that takes place from Friday, 6th to Sunday, 8th May.

The Diesel Gala will feature an intensive three-train service, whilst the beer festival is being held at Corfe Castle station, and is being organised and operated by Purbeck Kitchens. Admission to the beer festival will be free with a token system in operation for the purchase of drinks.

Appearing at the gala will be two ex-British Railways Class 33 heritage diesel locomotives that are based on the Swanage Railway.

D6515 Lt Jenny Lewis RN, was formerly numbered was formerly 33 012. As D6515 it hauled the last train through Broadstone to Wimborne when it cleared Wimborne’s station yard of wagons after British Rail closed the line to freight trains in May, 1977.

Subject to availability, the visiting diesel locomotives will be:

Trains will operate along the entire length of the nine-mile line, past Norden station and beyond Furzebrook to the River Frome where it will be within sight of Wareham and half-a-mile short of the London to Weymouth main line.

On Thursday, 5th May, a special ‘Thirty Seven Thursday’ preview event will be held with a day of diesel and steam trains between Norden, Corfe Castle, and Swanage featuring Class 37 diesel locomotive No. 37 703.

On Friday and Saturday evenings, ‘Beerex’ special trains will run, hauled by D182 on Friday and 50 026 Indomitable on Saturday.

“This year’s eagerly awaited diesel gala – the first since 2019 because of Covid – is being staged because there is an ever-growing national following for heritage diesel locomotives, particularly among younger rail enthusiasts.

“Over more than 15 years, our diesel gala has grown in popularity to become one of the most highly regarded annual events of its type in the country.

Full details of the Diesel Gala and Dorset Beer Festival, including timetables and fares, are available from the Swanage Railway’s website at http://www.swanagerailway.co.uk. Reduced price fares apply if tickets are purchased online in advance of the event. Class 25 D7659 is to remain at the North Norfolk Railway until late July following its appearance at...