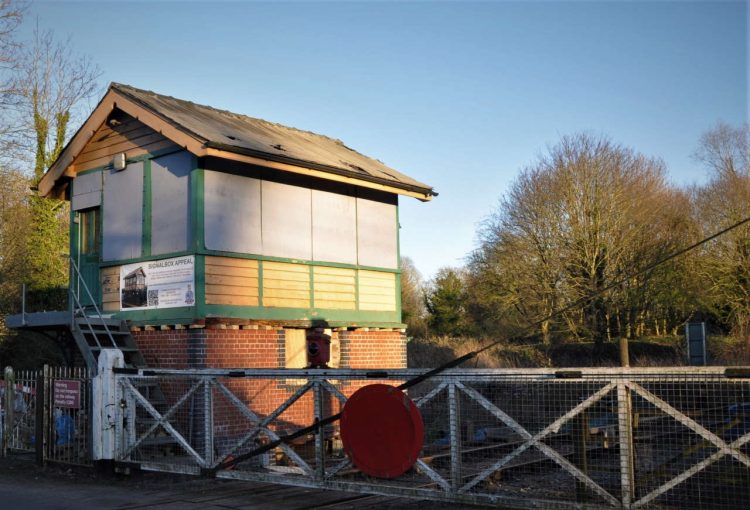 Amelia is an artist who creates what are known as intaglio collagraph prints and hand-drawn, digitally-coloured-pattern designs, and incorporates them into her collagraphs using an additional technique called chine-collé.

She then creates reproductions in the style of old rail posters for some of the locations she represents in her work. The railway benefits with the proceeds from the sale of her specially created, limited-edition poster print being donated to the railway’s ongoing appeal.

The money from the railway’s Signal Box Appeal is paying for the restoration to working order of the Victorian signal box that is now at Wymondham Abbey station on the Mid Norfolk Railway.

The signal box was originally located at Spooner Row, 5km from Wymondham Abbey, and was generously donated by Network Rail after becoming redundant. To accommodate the box, a new brick base was constructed by MNR volunteers next to the level crossing at Wymondham Abbey station, where it has been a familiar sight to visitors for many years.

Leading the restoration project for the Mid Norfolk Railway is Peter Singlehurst, and he said: “The railway is extremely grateful to Amelia for her generous support to the project and we hope that the new view at Wymondham will inspire her to create more art in due course”.

The Wymondham Abbey Signal Box appeal is still open and donations can be made via the railway’s website at
http://www.midnorfolkrailway.co.uk/donations

Amelia said: “Wymondham is my home town and the Wymondham Abbey Station is part of its inherent intrigue and beauty. I believe this signal box will be a wonderful addition and wholeheartedly support the pre-loved aspect. I can’t wait to see it up and running and to be able to say that I helped in some small way!”

Northern calls for racegoers attending the Grand National this Saturday to support the ‘favourite’ transport option and travel by train to Aintree.