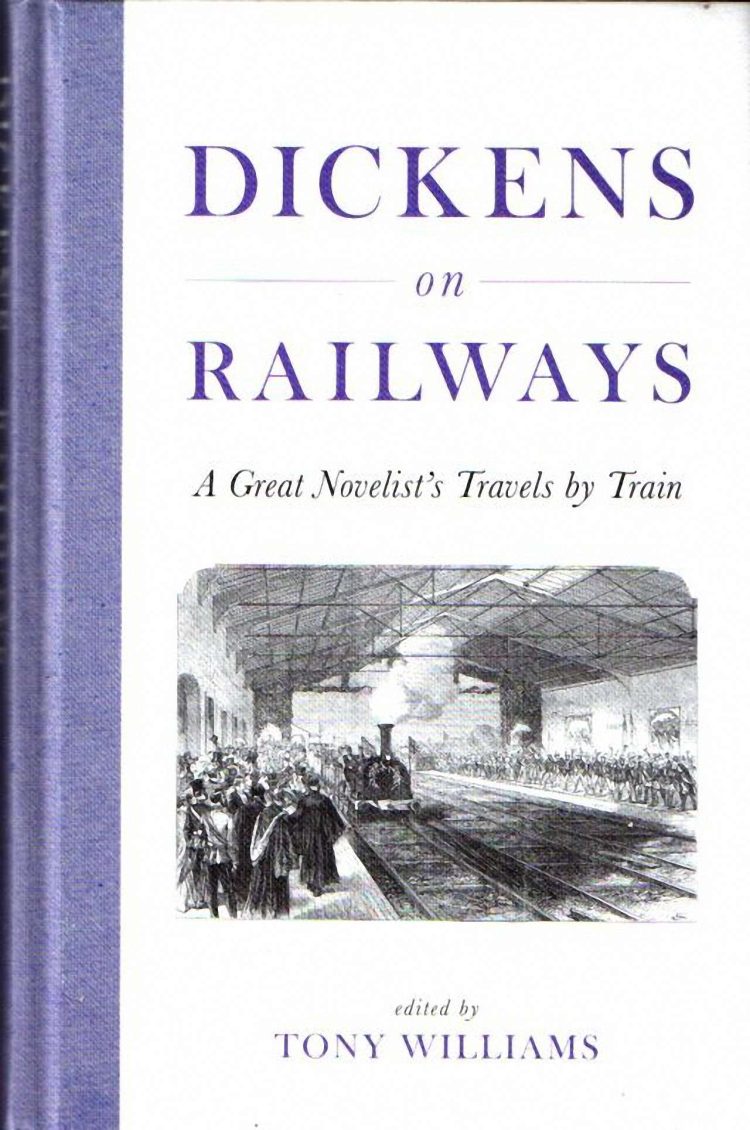 Dickens on Railways – A Great Novelist’s Travels by Train DEALS

Published in November 2020 and edited by Tony Williams, this hardback book from SafeHaven Books is a convenient size of 197 x 129mm with 224 pages. It is purely textual, except for contemporary illustrations on the first page of each chapter.

The book has 12 chapters: The individuality of Locomotives; Planning a Journey; Changing the Landscape; Making a Journey; Travels in Britain, America, and France; Danger and Disaster in the Imagination; Sustaining the Travelller; Managing the Railway; Supporting the Railway Workers.

It was impossible for Charles Dickens to avoid railways. In the middle of the 19th century, he was living and writing during the great age of railway building. He travelled extensively throughout Britain, France, and America where the railroads enabled him to travel vast distances on his reading tours. He was even personally involved in the notorious Staplehurst train crash in Kent.

So he wrote about them, in novels like Dombey and Son and Martin Chuzzlewhit; in a classic ghost story The Signalman; in satirical pieces on railway catering in those days.

His travel writings were so perceptive, from the incomprehensibility of a Bradshaw’s timetable; about train journeys anywhere from Wolverhampton to Massachusetts; and on the Individuality of Locomotives.

The editor is a former President of the International Dickens Fellowship. In this book, written 150 years after Dickens’ death, he has assembled a selection of Dickens’ railway writings into a handsome little volume ideal for a long train journey.

What soon becomes obvious is Dickens’ observational skills. He was very much a man fascinated by technological progress and its potential for good. John Ruskin described him as being of the ‘steam whistle party’.

Dickens often described the act of writing as ‘getting up steam’, and of ‘blazing away’. This book has plenty of examples of his skill at turning a seemingly mundane description into a brilliant picture in words. To take but one example, in Pickwick Papers Tony Weller, father of Sam, says “And as to the ingein, – a nasty, wheezin’, creakin’, gaspin’, puffin, bustin’ monster, always out o’ breath, vith a shiny green-and-gold back, like a unpleasant betle in the ere gas magnifier.”

His observational artistry is seen again in his narrative of a visit to Carlisle in 1857. Here Dickens described the station as “All manner of cross-lines of rails came zig-zagging into it, like a Congress of iron vipers; and, a little way out of it, a pointsman in an elevated signal-box was constantly going through the motions of drawing immense quantities of beer at a public-house bar.”

As Dickens was writing about railways in the mid-nineteenth century, the editor has chosen to illustrate the book with contemporary illustrations. In the frontispiece to Chapter 2, a nineteenth-century cartoon titled “Planning a Journey”, a gentleman is struggling to unravel the complexities of the railway timetable, strangely a scene that is often replicated today.

To take an extract from his Narrative of Extraordinary Suffering, Dickens writes of a Mr. Lost consulting Bradshaw’s Railway Guide and found an entry for Ware Tu …6 without any other explanation. Further on he declares that he departed from Cirencester exactly an hour before he arrived there, and left Gloucester ten minutes before he got to it. A clear example of the need for standardising time across the railways, and much food for consumption in Dickens’ writings.

In Chapter 4, ‘Making a Journey’ the frontispiece depicts a scene where a gentleman offers kind words to a young boy apparently travelling by himself in an illustration titled “The Railway Station: or the power of kind words” by H. Anelay, 1864.

Chapter 20 of Dombey and Son tells the story of Dombey’s five-hour journey from Euston to Birmingham in 184. Yet when the novel was published in 1848 the journey took only three hours. Once again, Tony Williams’ extract shows a superb example of descriptive skills as Dickens captures the rhythms of a train as it sweeps through the countryside.

In June 1865 Dickens Dickens was involved in a horrific train crash at Staplehurst in Kent as he was travelling back from France. Dickens helped tend to survivors of the crash, which killed 10 people. So Dickens can write from personal experience in Chapter 8 “Danger and Disaster; In the Imagination”.

Train enthusiasts, fans of Charles Dickens, and anyone who enjoys stories written by someone who has a wonderful command of the English language will enjoy this book.

The editor, Tony Williams, gives crisp and helpful introductions to the various selections he has chosen from the pen of the great 19th-century author. Dickens’ observations of both the initial days and later dominance of rail traffic in Great Britain are a joy to experience.

In summary, this is an attractive and compact book that will fit neatly inside a rucksack, briefcase, or even a large pocket. It is of interest to anyone who appreciates the work of Dickens, has an interest in railways, or simply enjoys a book that makes full use of the descriptive qualities of the English language. Very highly recommended.

The book is available to purchase from Amazon for around £11.62 as well as from SafeHaven Books.

We would like to thank SafeHaven Books for providing RailAdvent with a copy of the book for review.

Dickens on Railways – A Great Novelist’s Travels by Train

An attractive and compact book that will fit neatly inside a rucksack, briefcase, or even a large pocket. A book to curl up on the sofa with, or to dip in and out of on a daily commute. Of interest to anyone who appreciates the work of Dickens, has an interest in railways, or simply enjoys a book that makes full use of the descriptive qualities of the English language. Very highly recommended.

Dickens on Railways – A Great Novelist’s Travels by Train DEALS