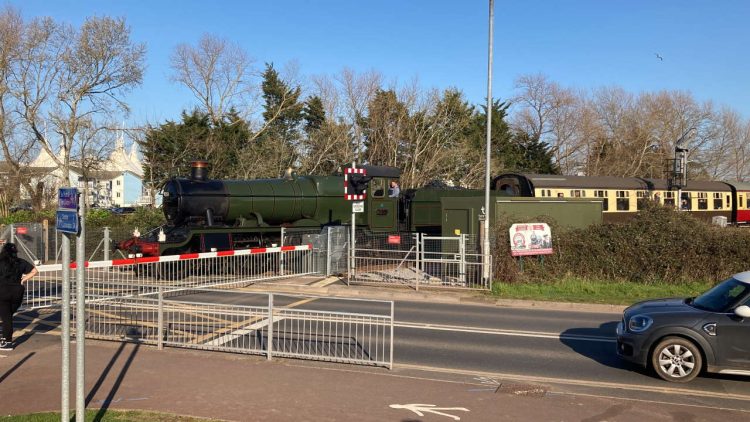 For the first time in over two years, a passenger train has run to Minehead on the West Somerset Railway (WSR).

Cheers and loud applause from a large crowd waiting on the platform greeted the train, whilst bosses at the railway were delighted with the turn-out.

Although engineering trains have used the Seaward Way crossing for several weeks, the first passenger service was the 10.15am on Saturday, 19th March from Bishops Lydeard.

During the day, there were three trains in each direction between Bishops Lydeard and Minehead. Next weekend, Saturday 26th and Sunday 27th March, the same service will be running.

An added attraction is the popular Quantock Belle first-class dining carriages which will be providing a Mothers’ Day lunch on Sunday.

The railway’s next big event is the official Return to Minehead weekend on Saturday, 2nd and Sunday, 3rd April. VIPs will help to celebrate the re-opening of the resort’s Seaward Way level crossing, which has been brought back into use after many months of modernisation work to install new barriers and lights; the crossing also needed emergency repairs after damage caused by Storm Eunice.

During the opening ceremony, the Watchet Town Band will play and groups from the WSR as well as a number of local charities and organisations will be staging displays and stalls on the station. Other attractions throughout the weekend will include children’s entertainment, live music, vintage bus rides around Minehead, and guided tours of the engine shed.

Kerry Noble, the railway’s General Manager, said “There was a fantastic buzz of excitement and enthusiasm not just at Minehead but at all our stations along the line.”