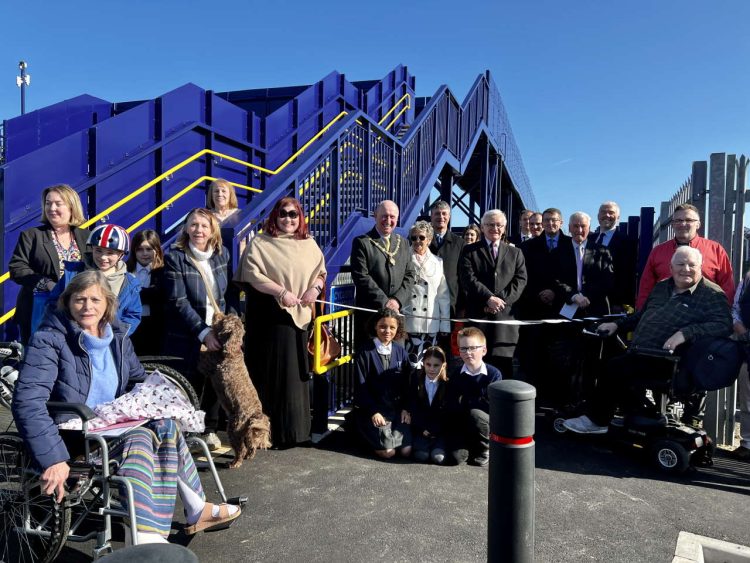 A new accessible footbridge has been opened in Cleethorpes to reconnect the town centre with the beachfront.

The new bridge includes ramps and stairs to provide an accessible and safe route over the railway from Suggitt’s Lane to the promenade. It replaces a level crossing that was closed in April 2019 for safety reasons.

The £3.6m project was jointly funded with £2m from Network Rail and £1.6m from the Department for Transport and will be owned and maintained by North East Lincolnshire Council.

Much of the structure for the footbridge in Cleethorpes was built off-site to minimise the impact on people living nearby. Work began in June 2021, and engineers have installed an 11-metre-long main bridge deck weighing around 10 tonnes and 300 metres of accessible ramps. The bridge is fitted with lighting and four CCTV cameras to improve safety in the area.

Mr. Vickers said: “The decision to close Suggitt’s Lane Level Crossing was highly controversial and has caused a lot of inconvenience for the local community. But we’re now able to move on. Thanks to the high-profile local campaign and the intervention of stakeholders including the Prime Minister, we now have this fantastic new facility that will provide all members of the local community safe access to the beach, the North Promenade, and beyond.”

Andrew Murray, Director of Engineering and Asset Management for Network Rail, said: “I’m thrilled to see the footbridge now open for people in Cleethorpes. We’ve worked closely with North East Lincolnshire Council to build a safe and accessible route over the railway, which will restore a much-used link to the beachfront. I’d like to thank the community for their support whilst we built the bridge, and I hope that its opening comes as welcome news.”

North East Lincolnshire Council’s Portfolio Holder for Environment and Transport, Cllr Stewart Swinburn, is delighted with the outcome of the project. He said: “There is no doubt just looking at the new structure what a difference this will make especially to local people, who will now be able to enjoy safe and easy passage from their homes to the beach. This is a perfect example of partnership working at its best, which has delivered a great result and we want to thank everyone who has been involved.”

Lynn Sayles, leading member of the Suggitt’s Lane Campaign Group, said: “This is the end of a long journey and for many local people a journey that has been so very worthwhile. The lack of a safe crossing for this community over to the seafront has restricted the freedom of people who simply cannot walk the longer way around. Parents and carers with young children and those with mobility problems have been badly impacted and we are so pleased today to be able to see they now have their freedom back – freedom to walk across this bridge and enjoy the real benefits of living by the water.”

Organised by the Harrogate Civic Society, a special exhibition was held at one of Northern's stations.