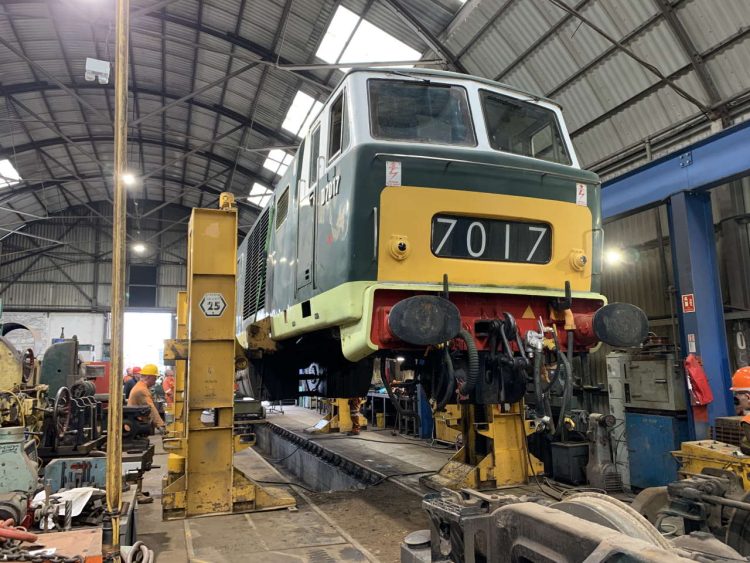 Using 25-ton jacks in the WSR Restorations ‘Swindon Shed’ at Williton on the West Somerset Railway (WSR), D7017 was lifted on 29th March so that the bogies could be rolled out to allow the primary and secondary suspension springs to be replaced.

The jacks were acquired from Bristol Bath Road depot back in the 1990s.

Donations that were made prior to the first lockdown were used to purchase replacement springs, the loco having last worked public services on the WSR in 2019.

Except for work on the ‘Commonwealth’ pattern bogies that are currently being dismantled to gain access to the springs, which is expected to be completed by the end of next week, the loco is fully serviceable. The DEPG is looking forward to getting the work done and getting the loco back to work on the WSR as soon as possible.

D7017 entered service at Bristol Bath Road depot in January 1962, and worked from there until being re-allocated to Old Oak Common in October 1971. Being a diesel-hydraulic, the loco was considered ‘non-standard’ and was withdrawn in 1973, only to be reinstated soon after because of a shortage of motive power that summer.

Shortly after withdrawal, D7017 was purchased shortly afterwards by the D+EG (the forerunner of the DEPG), then was towed to Taunton by 25162 in July 1975. It remained there until March 1976 when it was moved to Minehead on the fledgling WSR.

On Saturday, 19th March 1977, the loco worked the ‘Quantock Flyer’ charter, which was the first revenue-earning service of a preserved mainline diesel, and has been a regular performer on the WSR ever since.

A new interpretation of the Gauge Museum at Bishops Lydeard station on the West Somerset Railway was opened...