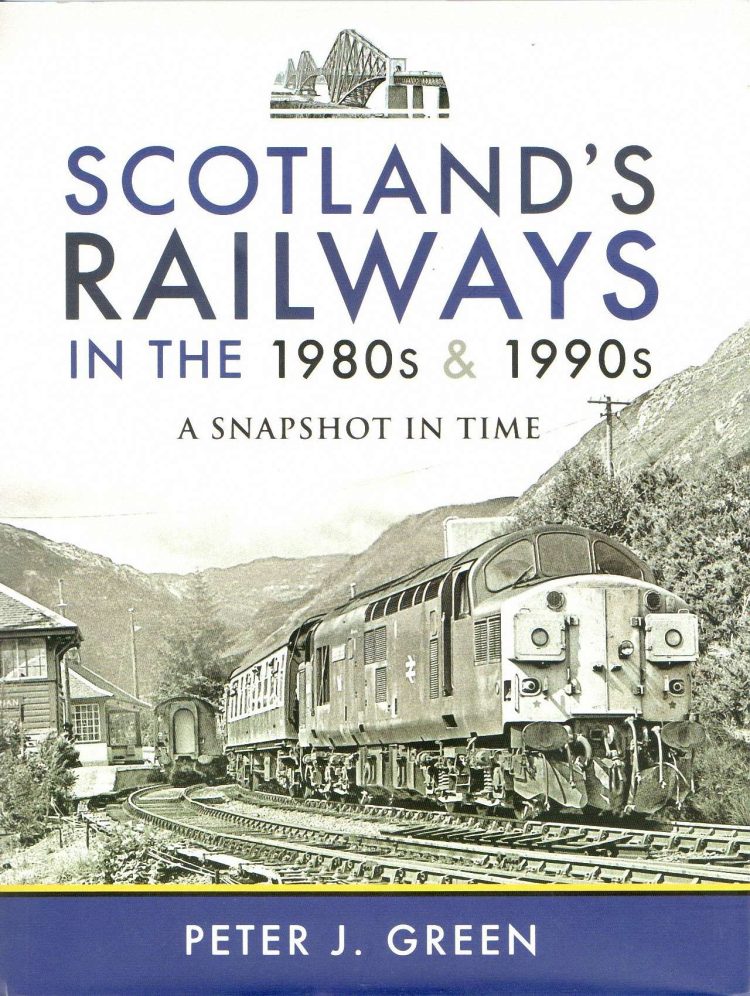 Published in 2020, this book from publishers Pen & Sword provides a selection of photographs taken by the author between 1984 and 1991. During this period, he visited Scotland many times to record locomotives and their trains in the extraordinary Scottish railway landscapes.

Written by Peter J. Green, the hardback book measures around 28.6 cm x 22.4 cm, is 200 pages long, and has 350 black and white illustrations arranged two to a page and a system map. It has a published price of £25 from Pen and Sword, and at the time of writing it can be obtained from Amazon for £18.29. The quality of the finished product is impeccable.

This is a pictorial book that covers in 16 parts the author’s visits to Scotland from 1984 to 1991. The book takes us on a geographical tour through Scotland, starting with the Far North Line from Inverness to Dingwall and working south along the Highland Main Line, the West Highland Line, the lines around Glasgow and Edinburgh, South-West Scotland, and the West Coast Main Line.

With such a small time frame, the content is inevitably biased to the traction that was most prevalent during those years, mainly Class 37s and 47s with a fair sprinkling of Class 26s and 27s. although I was surprised that there weren’t more shots of Class 20s.

A small niggle is the map, which is in two sections on the front and reverse of two separate pages, with no overlap between the halves. However, that is minor compared with the map itself which, as the author states, has been converted from colour to black and white, and is a modified version of a 1941 map. In adapting the map for this book the station names have lost their legibility, with the names becoming pixilated and impossible to read, even under a microscope.

That minor criticism is outweighed though by the photographs, both in their quality and their composition. The author has made the most of the wonderful Scottish scenery to capture the whole railway scene rather than just the engine and coaches. Often, the train is incidental to the whole scenic image with a superb result, as exemplified by the photograph of a Class 37 crossing Glenfinnan Viaduct.

The large format of the book coupled with the use of black and white photographs and two photographs per page does full justice to the subjects and their surrounding landscapes.

Although the chapters aren’t numbered, the chapter headings are unambiguous.

A novel but very welcome touch is numbering the photographs rather than the pages, which makes cross-referencing from the contents easy.

The author has captured some steam specials in typical Highland scenery to punctuate the diet of diesel trains that predominate in the rest of the book.

No book of Scottish railways would be complete without a view of Glenfinnan Viaduct. Here we see a Class 37 crossing the viaduct which typifies how the train complements the photo rather than being the main subject.

Long-gone from the Scottish scene are the Park Royal railbuses. Top left shows a railbus on an Oban to Crianlarich shuttle service in 1985, while the unmistakable outline of Connel Bridge is seen in the lower photograph.

Photographs of Oban station looking towards the buffer stops are likely to be dominated by McCaig’s Tower on the skyline, and the ones on the right are no exception.

In summary, this book full of nostalgia for those who thought railways after the end of steam would be an endless stream of lookalike boxes. The shots are well composed and whole scenes are captured, so there is plenty of infrastructure to be seen. if you are interested in the railway scene in Scotland of 30 to 40 years ago, this is a great book for browsing. Highly recommended.

A book full of nostalgia for those who thought railways after the end of steam would be an endless stream of lookalike boxes. The book is a revelation for not only the beauty and grandeur of the landscape through which the railways ran, but the way in which the author has managed to make the train a part of the overall image rather than just the subject. The shots are well composed and whole scenes are captured, so there is plenty of infrastructure to be seen. if you are interested in the railway scene in Scotland of 30 to 40 years ago, this is a great book for browsing. Highly recommended.

Police warn drivers after misuse of level crossing in Berkshire