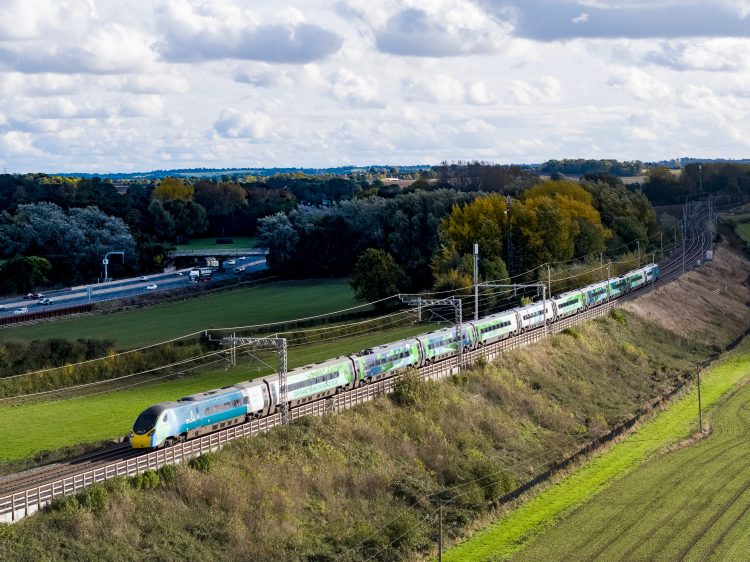 A joint partnership between Avanti West Coast and Eurostar for their COP26 Climate Train has scooped a prestigious railway award.

The special ‘Climate Train’ carried hundreds of delegates from Amsterdam to Glasgow for the COP26 conference, thanks to a partnership between Avanti West Coast, Eurostar, NS, ProRail, and Youth for Sustainable Travel.

Official delegations from the Netherlands, Belgium, Italy, and Germany joined young people, MEPs, and NGOs such as Friends of the Earth and Oxfam, on one of the more sustainable ways that delegates travelled from the continent to COP26.

With the train travelling at 186mph between Amsterdam, Rotterdam, Brussels, and London, youth activists joined politicians and rail experts to debate and exchange ideas. They discussed topics such as how to speed up the modal shift towards sustainable travel and how innovation in rail can support this.

On arrival in the UK on the Eurostar service, delegates made their way the short distance from St Pancras to Euston, where they boarded one of Avanti West Coast’s iconic Pendolinos. To celebrate the Climate Train’s journey, the train was fully wrapped with a unique sustainability design.

In recognition of the Climate Train journey, Avanti West Coast, Eurostar, and ScotRail were honoured with a prestigious ‘Golden Whistles’ award for their efforts in highlighting rail’s role in the battle against climate change during COP26 and beyond. The honour was shared with fellow train operators for highlighting the rail industry’s role in the battle for climate change.

The Awards were organised by Modern Railways magazine and the Chartered Institution of Railway Operators and presented in October last year at a prestigious event held at the Marriott Hotel, Grosvenor Square in London.

Managing Director of Avanti West Coast, Phil Whittingham, said “It’s such an honour to be recognised for the Climate Train and this initiative exemplified true collaboration between international rail operators. It showed that Avanti West Coast, like the wider rail industry, is committed to cleaner, greener transport for all.”

Jacques Damas, Chief Executive Officer, Eurostar, said “Rail has a leading role to play in helping to reduce carbon emissions, and the Climate Train is a shining example of what we can achieve in this area when we come together as an industry.

“At Eurostar, we look forward to continuing this journey as we commit to lowering our own carbon footprint by improving our supply chain and the origins of the electricity we use, as well as investing in our routes, timetables and customer experience. All this comes with one single objective – to make it easier for travellers to make high-speed rail their first choice for international short-haul journeys.”

Phil Sherratt, Editor of Modern Railways, added: “We are all aware of the grave climate crisis that confronts us. COP26 last autumn put Glasgow at the centre of the world stage. Not only did this present a great PR opportunity for the UK railway, but it was also a big operating challenge, given the huge numbers of people to be transported to, and moved around, Glasgow – at a time when the pandemic was still a big issue.

“I am pleased to say our railway measured up to the occasion. The Climate Train initiative showed the world that railways can provide a low-carbon option for long-distance travel.”
Golden Whistle images courtesy of Tony Miles / Modern Railways.

Train through Bishops Stortford to be disrupted for four months, affecting services between London, Cambridge, Stansted, and Kings Lynn Throughout this year’s Edinburgh Festivals ScotRail will be running later trains and adding extra carriages on services to...