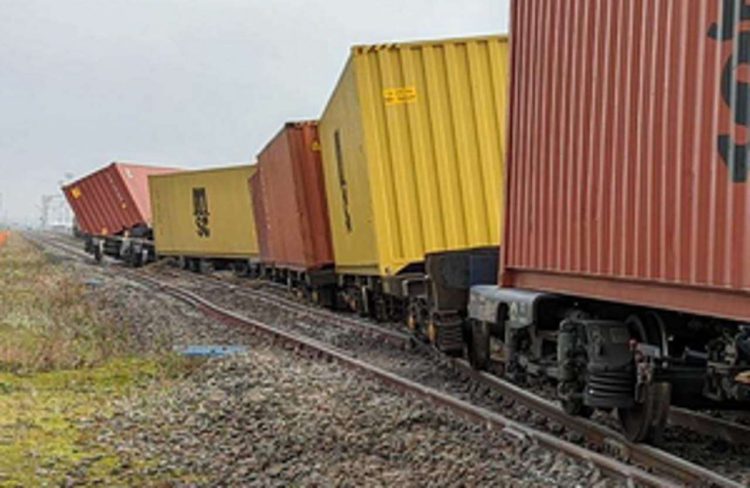 The Rail Accident Investigation Branch (RAIB) has released details of a derailment of a freight train while on the approach to London Gateway port near Stanford-le-Hope in Essex.

At about 05:45 on 24 December 2021, the 22:35 GB Railfreight freight train from Hams Hall near Birmingham to London Gateway derailed on the down Thames Haven line as it approached London Gateway port.

The train consisted of a Class 66 locomotive and 33 ‘container flat’ type wagons. The initial derailment occurred on infrastructure that is under Network Rail’s management. The leading bogie of the 12th wagon became derailed on plain line when the train was travelling at about 13 mph, but the train continued travelling for around 500 metres after this initial derailment. When it reached a set of facing points within the port boundary, a further four wagons derailed.

The wagon involved in the initial derailment was the middle wagon of an Ecofret2 set, which consists of three wagons semi-permanently connected to each other by steel drawbars. This wagon was the only one in the train that was not loaded with a container.

No injuries were caused by the derailment, but extensive damage was caused to the track and signalling equipment inside the port boundary. The rail connection to the port remained closed until temporary repairs were completed; the port reopened on 4 January 2022.

The RAIB investigation will seek to identify the sequence of events that led to the accident. It will consider the track conditions, loading of the wagons, wagon characteristics, how the train was driven, and any underlying management factors.

RAIB’s investigation is independent of any investigation by the railway industry or by the industry’s regulator, the Office of Rail and Road. It will publish its findings, including any recommendations to improve safety, at the conclusion of its investigation.

The multi-million-pound deal will see Wabtek provide planned preventative maintenance and failure repair for 720 wagons, 570 of...