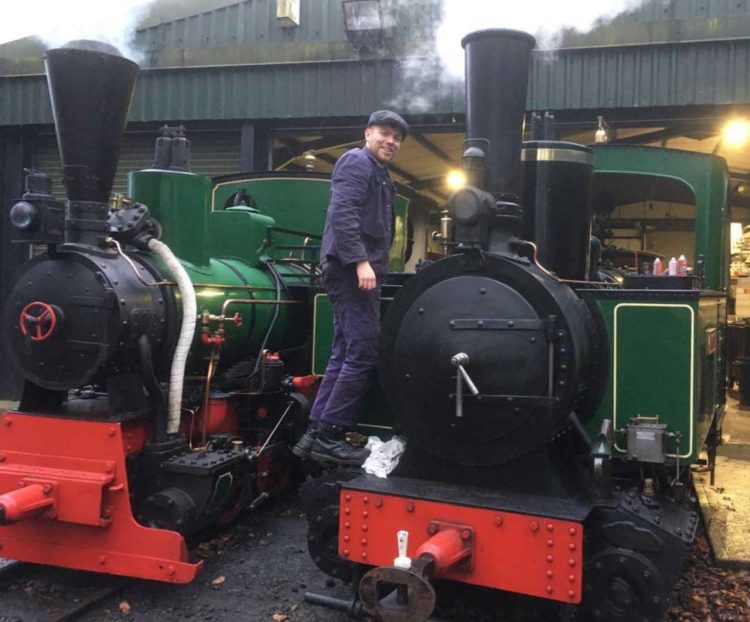 The Bredgar and Wormshill Light Railway (BWLR) based near Sittingbourne in Kent has issued the February update of the latest work carried out by its workshop.

During the last few weeks, a group from Swanley visited for a private hire day, boiler testing has been carried out, further work has continued on restoring the fire engine, and lighting has been fitted to one of the coaches.

The private hire day used No. 2 Katie and No. 7 Victory for a driver experience with a large group of model engineers.

Katie is an 0-6-0 well tank built by Arn Jung of Jungenthal, Germany, in 1931 and spent its entire working life in Cameroon in West Africa for the Westafrikanische Pflanzungsgesellschaft Viktoria on a 48km long system serving banana, palm oil, cocoa, timber, and tea plantations. It was shipped to England for preservation in 1973 and was acquired for Bredgar in 1980. An interesting feature is the lack of flanges on the centre pair of driving wheels, enabling very tight curves to be negotiated.

Victory is an 0-4-2 tank locomotive that was shipped to Queensland for the sugar industry until it was retired in the 1940s and bought by an Australian enthusiast to work at a theme park in Canberra. It came to Bredgar in 1996 where it underwent an extensive rebuild, including a new boiler, before returning to use in 2006.

In the shed, No. 8 Helga has passed its steam test after its 10-year overhaul. No. 10 Zambezi has recently passed its hydraulic test, which means that Helga won’t be far behind. Helga is an 0-4-0 well tank built by Orenstein & Koppell of Berlin in 1936 and worked on a number of large construction sites in North Germany until 1957. In 1969 the late Alan Bloom acquired it for use on his Nursery railway at Bressingham in Norfolk, then in 1973 it was sold to the Brecon Mountain Railway in Wales where the running gear was overhauled. It was purchased by the BWLR in 1999 and returned to service in 2011.

Four other engines are undergoing cold examinations in readiness for their yearly steam tests.

Various maintenance jobs have been done on the track to prepare for the start of the season, including track packing, cleaning and oiling points and signal boxes, leaf clearance, and some signal cable replacements.

After a couple of outings, the fire engine is having work done on its air systems with some replacement tanks and valves, and some new LED lights fitted. It was originally used in Woodstock in Virginia, USA, and arrived at the BWLR in October 2017. It is capable of lifting 400lb at full stretch 90 degrees to the truck or delivering 4000 Litres of water a minute from the nozzle at the top of the ladder.

Work is slowly progressing on fitting the lights to one of the coaches. Hobby and toy specialist Hornby has secured a £12m combined facility to support its requirement for working capital...