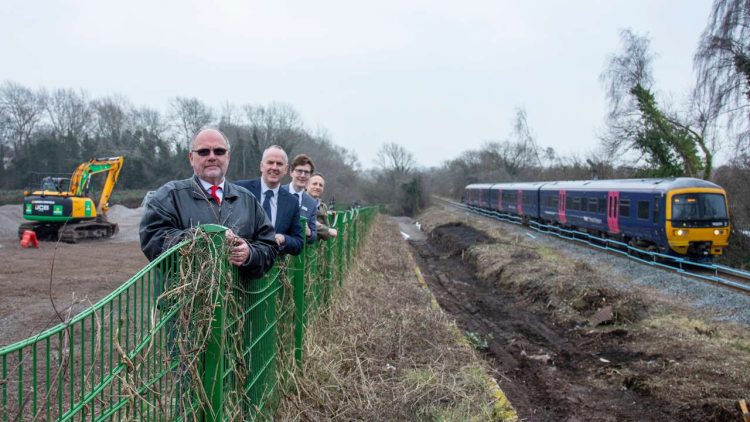 The building of the new railway station that will connect Portway Park & Ride with the Severn Beach railway line is now underway.

Bristol City Council has been working alongside Network Rail in order to bring the first new railway station for Bristol in 95 years!

The huge £4.2m project is now underway at the Portway Park & Ride site in Shirehampton as part of the West of England Combined Authority’s larger plans to improve the local railway network via the progressive MetroWest programme.

The brand new station is jointly funded by Bristol City Council, the West of England Combined Authority, and the UK Government’s Department for Transport.

Network Rail finished their preparation works in December and will now allow for the first part of the construction to begin. This first stage will see the replacement of the safety fencing along the railway line, the installation of a ramp down to the tracks and the excavation of the platform area ahead of laying foundations.

The majority of the work will take place through the night in order to keep disruption for rail passengers to a minimum however, the Severn Beach line will see a temporary closure from the 19th to the 27th of February. The closure will allow Network Rail’s engineering team to make necessary changes to the signalling required to accommodate the new station and building of the concrete foundation ahead of the new platform. During this time improvements will also be made to drainage along the railway line.

During the line closure, trains will not call at stations between Bristol Temple Meads and Filton Abbey Wood, and between Severn Beach and Stapleton Road. A rail replacement bus service will be running and the Portway Park & Ride facility will be open throughout the work with all Park & Ride buses operating as normal.

The station is set to be opened later this summer and will be served by the newly improved half-hourly services between Bristol Temple Meads and Severn Beach. The opening of the station will supplement the current Park & Ride bus service providing a useful extra transport option for the local community as well as giving Park & Ride users travelling a greater distance the choice of rail travel for destinations along the Severn Beach line or further, using the wider rail network from Bristol Temple Meads.

Bristol City Council is also planning to improve its Park & Ride facility by creating more parking spaces once the new station is opened.

Councillor Don Alexander, Bristol City Council’s Cabinet Member for Transport, said: “It’s really exciting to see work starting on the first new rail station in the city in almost a century, and this is a major milestone for the project.

“Portway Park & Ride station will improve connectivity to the rail network for the local community and more widely for users of our Park & Ride site, allowing many more people to choose to travel by rail to work, study and for leisure.

“It will help us to ease congestion on the roads in a sustainable way and reduce air pollution, as we work towards our ambitious goal to be carbon neutral and climate resilient by 2030.”

Mike Gallop, Network Rail Western Route and Strategic Operations Director, said: “We are delighted to be working with Bristol City Council, the West of England Combined Authority and GWR on opening this new station for Bristol.

“The start of construction for the Portway Park & Ride station heralds the latest development in our efforts to transform rail travel for our passengers in and around Bristol and the wider West of England area and will help further connect communities served by the Severn Beach line with this new, additional station.”

“Improving our public transport network is crucial so local people can get more easily to work, study and to enjoy our great region and is vital to meet our ambitious net-zero targets.”

Tom Pierpoint, Business Development Director for GWR, said: “We are delighted to see work starting at Portway Park & Ride station. Recent improvements to the Severn Beach line increased services to half-hourly, starting earlier in the morning and finishing later in the evening.

“This new Portway Park & Ride station will help more people to switch to rail for their journeys into central Bristol, which is great for the environment and supports Bristol’s clean air campaign.”