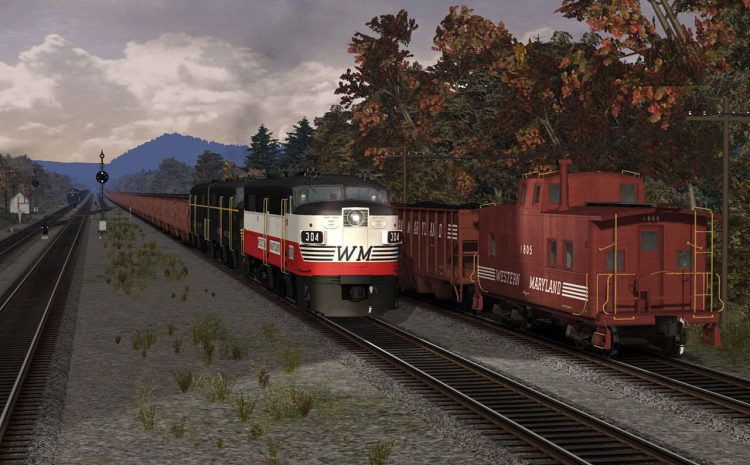 Players can works a variety of scenarios, including:

Authentic railroading can be played by handling the Thomas Subdivision’s lifeblood – coal. At Hampshire Mine, a classic set of Western Maryland EMD F7 “covered wagons” could be switching coal-laden hoppers, while on another day a lash-up of WM first- and second-generation EMDs may have a long string of coal in tow at West Virginia Junction. Thomas Subdivision is criss-crossed by the North Branch of the Potomac River frequently, and could be the setting for “Circus Colors” WM Alco FA2 304 to lead a pair of sisters across the river near Rocket Center, West Virginia.

At iconic Westernport, Maryland, a pair of WM GP35s can spliced by a veteran F7B to lug coal off Western Maryland’s “C&P Subdivision” and onto Thomas subdivision rails controlling five notable types of first- and second-generation Western Maryland diesel power, including the Electro-Motive BL2, F7, GP9, GP35, and Alco FA2.

Along with hauling coal tonnage, challenging and realistic local freight and switching duties can be set up, such as a pair of EMD Geeps, arriving with WM’s “East Local” at Beryl Yard and West Virginia Junction, and soon working the sprawling paper plant at Luke. A distinctive WM EMD BL2 82 could have boxcars in tow as it switches the military installation at Rocket Center, West Virginia.

Another scenario could see the caboose of a B&O eastbound train gliding past as Western Maryland Alco FA2 302 and swinging off the WM’s Thomas Subdivision onto the B&O Mountain Subdivision at Twenty-First Junction following a disruption on the WM line. Later in the day, an EMD BL2 81 could depart from WM’s Ridgely Yard bound for the site of the disruption with a M-O-W train.

Greater Anglia’s timetable alterations from Monday the 17th of January