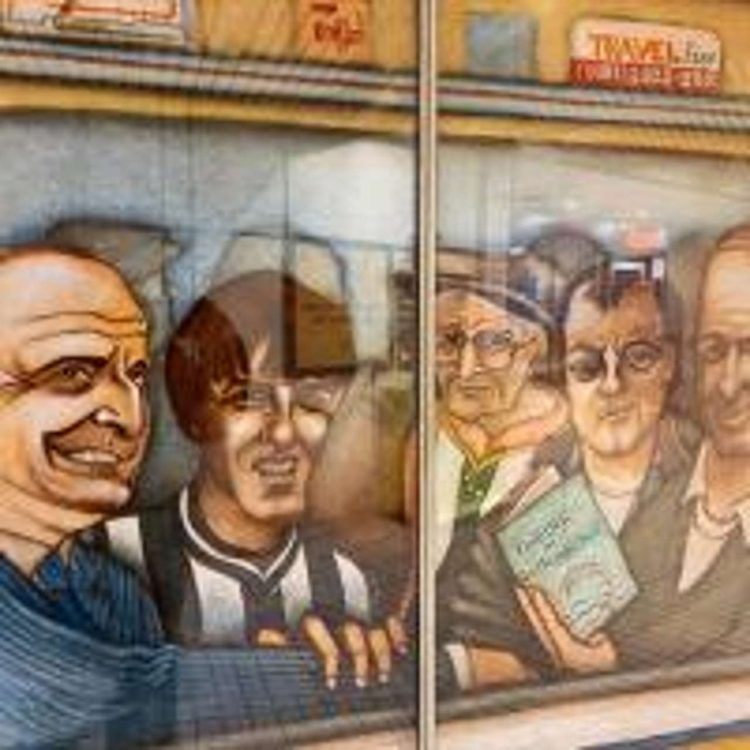 A mural featuring well-known and much-loved personalities from Tyneside is celebrating its 25th year since first being displayed at Monument station on the Tyne and Wear Metro.

Painted by former coal miner turned artist and sculptor Robert Olley, the popular and colourful piece of artwork titled Famous Faces has been on display at the station since 1996. The mural depicts 14 of Tyneside’s most charismatic figures looking out of the window of a Metro train carriage.

In order to convey the breadth of achievement across the region, the mural includes celebrities from a variety of backgrounds including personalities from sport, entertainment, broadcasting, literature, music, acting, and the church. Sponsored by Nexus, Metro’s operator, the painting shows caricatures of local personalities out from the carriages of the train. Over the last quarter of a century it has been seen by millions of Metro passengers.

The director-general of Nexus at the time, Mike Parker, loved the piece so much that he had had it placed on display next to a busy staircase at Monument station in the centre of Newcastle, which is the busiest station on the Metro network.

In 2021, Nexus commissioned a special film to celebrate the many pieces of public art that have been displayed on the Metro system over the last 40 years. In that video that Robert Olley recounted how Famous Faces came to fruition, and his feelings about the iconic work that he had created. He said: “I remember that I needed someone to open my exhibition at the Customs House and I asked the then director general of Nexus Mike Parker if he would help me out.

“I knew Mike quite well and thought if he’s opening the exhibition at the Customs House for me then I’d do a painting for Nexus in return. I decided this idea of a railway carriage called famous faces, which would be a Metro carriage with all these local celebrities on board. People like Sting, Jimmy Nail, and the late Mike Neville.

“When the exhibition was over with I was delighted to learn that the mural was going on permanent display at Monument Metro station – and it’s still there to this day. I would love to know how many people have seen it. It’s got to be in the millions.

“My family use Monument Metro station quite a lot and they always say that there’s always somebody looking at the mural and trying to identify who all the people are in the carriage. The family like the fact that people say ‘oh, it was your dad who painted that one’. It’s nice to have something there that is your legacy.”

Metro Operations Director, John Alexander, said: “Famous Faces is probably the most popular of the many artworks to be found dotted around our Metro and bus stations.

“We always felt the piece needed a wider audience and it has been there now for 25 years. It sits next to one of busiest staircases and is seen by millions of local residents and visitors to the region.” A historic railway goods shed in Llanelli is to be transformed into a heritage centre thanks to a...