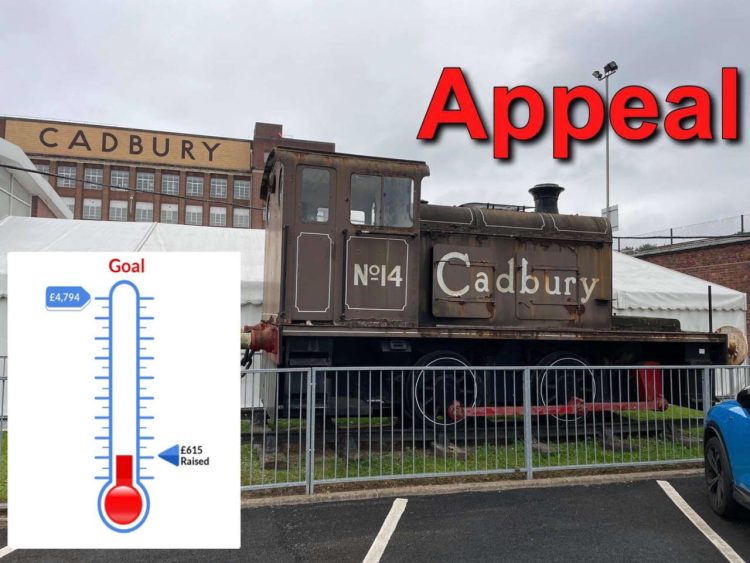 Cadbury World, which is on the site of the Cadbury factory at Bournville in Birmingham, has donated one of the locomotives that used to work at the factory to the Gloucester Railway Carriage and Wagon Museum (GRCWM).

The loco is Cadbury No.14, and it is currently on display as a static exhibit in the car park at Cadbury World. GRCWM is now seeking to raise the necessary funds (approximately £8,000) to transport No.14 to a secure facility.

The funds will also pay for the initial overhaul of the locomotive and shipping the original Gardner engine to a specialist restoration and workshop facility. There, a full inspection and list of required work will be drawn up for the loco to be upgraded to make it suitable for use on a heritage railway and for a vacuum braking system to be fitted.

The intention is that for the first year it will remain in its ex-service form. A full repaint into its original Cadbury livery, for which permission has already been granted, and with new lining, etc. will be carried out in the following year .

Can You Help Save Gloucester Horton Road MPD From Demolition?

The museum now needs to raise a further £4,179 towards the cost of transporting the loco from Bournville, and and have just a few days left to do this. GRCWM would welcome donations large or small via their main fundraising page on Crowdfunder. Other ways of donating can be found on the GRCWM Facebook Page.

If you would like to Gift Aid your donation please use the Gift Aid form here.

Driver Experience once the locomotive is operational;