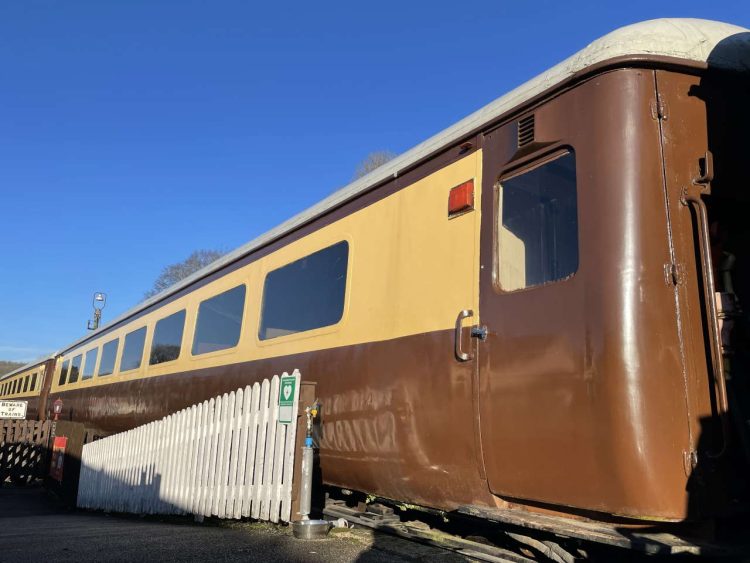 Built in 1973, it was converted for use on the Gatwick Express push/pull. The carriage is air-braked and for over 15 years has been used as a static catering seating area.

The bodywork and roof are generally in good condition, but the carriage requires an overhaul to return it to running order for operational use.

The interior condition is in quite good condition:

The door/droplights are not serviceable except for one that has been on the platform.

The Central Door Locking appears to be operational.

The batteries are in a poor condition.

The air conditioning system is generally complete but is unserviceable.

The Electric Train Heating and coach lighting are operational. They have been running from attached landlines which are not included in the sale.

240V domestic sockets powered from a landline are fitted at each end of the saloon and under the tables, which would be ideal for table lamps if the carriage were to be used statically.

The carriage will be sold as seen and can be viewed by prior arrangement.

A quantity of spare double glazing units is included to replace ones that have.

WyvernRail plc – The Ecclesbourne Valley Railway has provided the description of the carriage’s Condition in good faith.

Offers are invited for the carriage, and the sale price will be subject to VAT.

A condition of sale is that the carriage will be removed at the buyer’s expense by road from the site at Station Road, Wirksworth, Derbyshire. DE4 4FB. Crich Tramway Village is set to bring Easter fun for everyone with events taking place between the 9th...