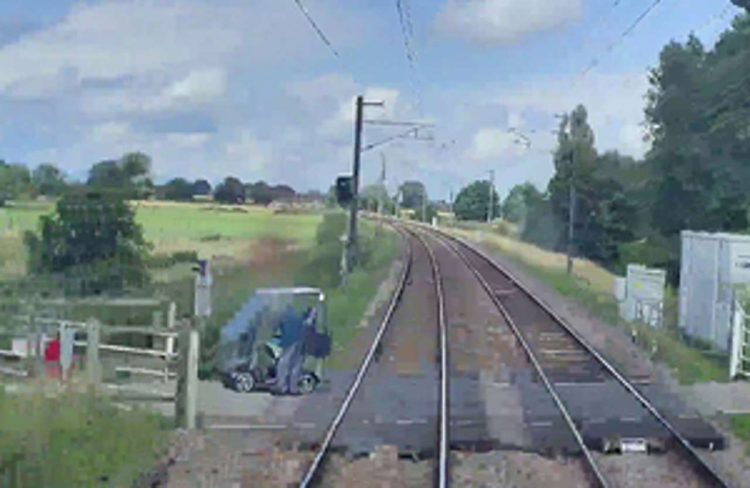 The Rail Accident Investigation Branch (RAIB) has released a preliminary report into a collision on 9 August 2021 at a level crossing at Burgess Drove near Waterbeach in Cambridgeshire.

The level crossing is a user-operated type. A Greater Anglia train passing over the crossing struck the rear part of a mobility scooter that was inside the crossing area, next to the down-side gate. The mobility scooter’s user was near the scooter when the collision occurred, but was uninjured. The scooter sustained minor damage.

Network Rail notified RAIB who carried out a preliminary examination into the circumstances of the accident. RAIB concluded that the accident occurred because the mobility scooter user could not completely cross the railway in the time available between the beginning of train approach warnings at the crossing which were provided by a red light and an audible alarm, and the arrival of the train.

The RAIB has estimated that the user involved in the collision would have needed approximately 100 seconds from starting to open the first gate until fully closing the second. However, the warning of a train approaching the crossing would have occurred only approximately 40 seconds before its arrival at the crossing.

RAIB found that the user was unlikely to have been physically fit enough to operate the user worked crossing in the way required of a vehicular user and was the probable reason they used the crossing as if they were a pedestrian. This would require them to first open the approach gate, move the mobility scooter forwards, close this first gate, and then move forwards over the crossing to the exit gate. After opening the exit gate, they would move forwards until clear of the crossing. The RAIB estimates this would have taken approximately 100 seconds, after which the user would have closed the exit gate behind them.

After reviewing the findings of its preliminary examination, RAIB has decided not to carry out any further investigation into the accident. RAIB had previously investigated an accident in 2016 at Alice Holt level crossing near Farnham in Surrey.

That investigation recommended that Network Rail should improve the guidance given to level crossing managers so that they could better assess the risk to vulnerable users, including mobility scooter users, at level crossings that rely entirely on users looking and listening for trains. However, the user-operated crossing at Burgess Drove is already fitted with red lights and an audible warning showing when it is unsafe to cross, so is not covered by this recommendation. RAIB has therefore written to Network Rail encouraging it to extend the intent of this recommendation to all user-worked level crossings which the public are entitled to use. The RAIB has launched an investigation into an incident when a track worker was struck by a train...