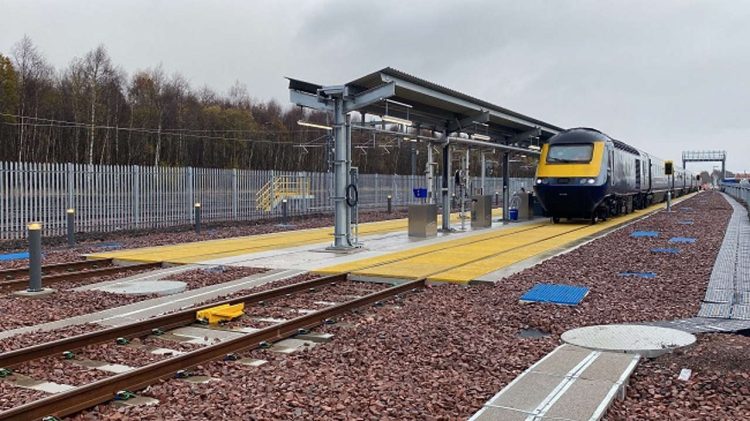 As part of the ‘Fit For The Future’ investments, Scotland’s Railway has opened a brand new engineering depot at Cadder, near Glasgow on the 12th of December.

The site for the new depot sits between Bishopbriggs and Lenzie on the Edinburgh & Glasgow line and fitted the bill perfectly being able to take in as many as six High-Speed Trains (HSTs).

The depot is set in an ideal location to allow easy access to both Glasgow Queen Street and Edinburgh Waverley stations where over 80% of Inter7City services start or terminate.

The depot is set on a large site and will allow the yard to be expanded if the need to accommodate further rolling stock should arise in the future.

An investment of £33m has been made by Transport Scotland for the creation of the new depot with the project run by Network Rail and will be operated by ScotRail on behalf of the rail network.

The delivery of the project has seen as many as 100 rail staff working on-site each day, with three new service platforms built and a new modular building that accommodates both ScotRail staff, Network Rail and their supply chain in a bid to reduce capital and ongoing operating costs.

The depot provides a new facility for train presentation staff and also equipment for re-fuelling and toilet servicing alongside a train wash which means that night-time cleaning and servicing of the HSTs that travel from Glasgow and Edinburgh to Aberdeen and Inverness can be carried out.

Some of the benefits of Cadder depot include:

• A reduction in the number of unproductive early morning and late-night HST train miles.
• Shifting the burden of stabling HSTs away from Perth, Haymarket and Eastfield Depots.
• Reducing emissions and noise for residents who live close to those other yards.

The impressive project has seen Scotland’s Railway engineers and contractors run 7.5km of cable and around 1,200m³ of concrete poured which is the equivalent of 3,000 tonnes! 3Km of new track has also been put in place using 3,300 sleepers and a 1km long 3m high security fence has been installed.

Inside the yard sees a new two-story office building that will house the Rail Systems Alliance Scotland staff, which is a partnership between Network Rail, Babcock and Arcadis. The office facility will be in operation both day and night and will also provide accommodation for ScotRail HST Depot staff.

The project has been carried out in line with government advice and has seen onsite staff physically distancing and using additional PPE where possible to enable everyone on-site to keep safe.

The pandemic has provided challenges for the project which had led to innovative adaptations to practices using technology which has seen the use of both simulation and digitalisation for the signalling design stage of the project which meant fewer onsite visits by the design team and supported the safety of working on the Cadder depot site.

Kirsty Devlin, ScotRail Head of Projects & PMO, said: “I am delighted that Cadder depot has opened.

“It means that we can accommodate more High Speed Trains in the central belt where most of them start and finish their journeys. And pressure will be taken off existing depots in Perth, Haymarket and Eastfield.

“This is another example of the massive investment we are making to transform Scotland’s Railway into a network that is fit for the future and that our customers deserve.” The RAIB has issued its report when a passenger train narrowly missed two track workers and struck a...