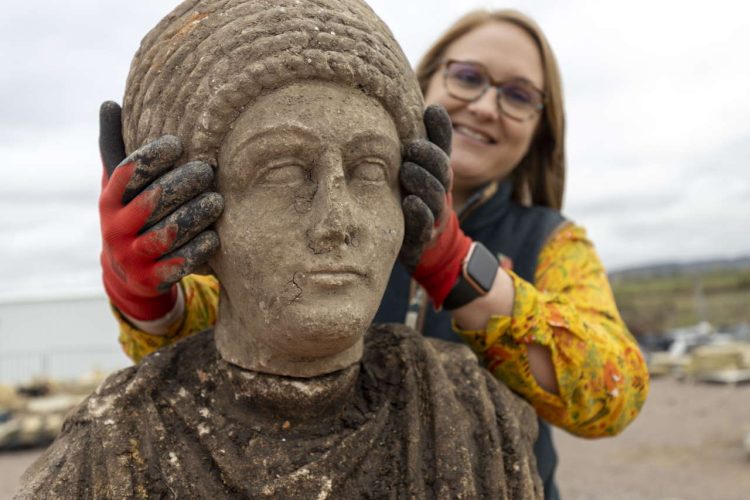 Archaeologists working on HS2 have unearthed a “once-in-a-lifetime” discovery of Roman statues and artefacts whilst excavating a church in Buckinghamshire.

The archaeologists were in the final stages of excavation at the site of the old St. Mary’s Norman church in Stoke Mandeville, and were excavating a circular ditch around what they thought to be the foundations of an Anglo-Saxon tower.

As they dug down, they uncovered three stone busts that were stylistically Roman. Two of the busts comprise a head and torso, which had been split before deposition, and the other just the head. The two complete statues appear to be one female adult and one male adult, with an additional head of a child.

The discovery of the artefacts caused excitement amongst the team working on the site, who described it as “uniquely remarkable for us as archaeologists”. The work has been carried out by HS2’s Enabling Works Contractor, Fusion JV, and their archaeological contactor, L-P Archaeology.

Besides the statues, an incredibly well-preserved hexagonal glass Roman jug was also discovered. Although it had been in the ground for what is thought to be over 1,000 years, large pieces of the jug were still intact.

Archaeologists working at the site were able to remove what they believe to be almost all the fragments. The team could only find one comparable jug, and that is a completely intact vessel that is currently on display in the Metropolitan Museum of Art, New York. Other finds at the excavation site include large roof tiles, painted wall plaster, and Roman cremation urns.

Disfiguring Roman busts by removing their heads was not entirely unusual, as it was common for statues such as these to have been vandalised before being torn down. These are early examples of how statues and historic artefacts have been discarded as society has evolved over time.

The artefacts will now be taken to a specialist laboratory where they will be cleaned and examined. Roman statues were typically painted in bright colours, so the creases of the statues will be examined for evidence of pigmentation. The final destination for the Roman finds will be determined in due course.

Dr. Rachel Wood, Lead Archaeologist for Fusion JV, said “For us to end the dig with these utterly astounding finds is beyond exciting. The statues are exceptionally well preserved, and you really get an impression of the people they depict – literally looking into the faces of the past is a unique experience. Of course, it leads us to wonder what else might be buried beneath England’s medieval village churches. This has truly been a once in a lifetime site and we are all looking forward to hearing what more the specialists can tell us about these incredible statues and the history of the site before the construction of the Norman church.”

As the dig at Stoke Mandeville comes to an end, the team working there has been able to piece together a more detailed analysis of the historic use of the site. It appears to be a natural mound that has been deliberately covered with soil to create a taller mound, which possibly may have formed a Bronze Age burial site.

The burial site appears to have been replaced by a square building which may have originated in the Roman period. Archaeologists believe that the building pre-dates the Norman church and was a Roman mausoleum, as Roman materials found in the surrounding ditch are too ornate and not enough to suggest that it was a domestic building.

The Roman building may have found further use during the Saxon period, but appears to have been finally demolished by the Normans when building St Mary’s church. The walls and demolition rubble of the Roman building are directly beneath the Norman foundations with no soil build-up in between. Saxon pottery and a Saxon coin were also found in a cut of the ditch. Further analysis of the data is being undertaken and the team hope to confirm this hypothesis.

Mike Court, Lead Archaeologist at HS2 said “HS2’s unprecedented archaeology programme has given us new insights into Britain’s history, providing evidence of where and how our ancestors lived. These extraordinary Roman statues are just some of the incredible artefacts uncovered between London and the West Midlands. As HS2 builds for Britain’s future, we are uncovering and learning about the past, leaving a legacy of knowledge and discovery.”