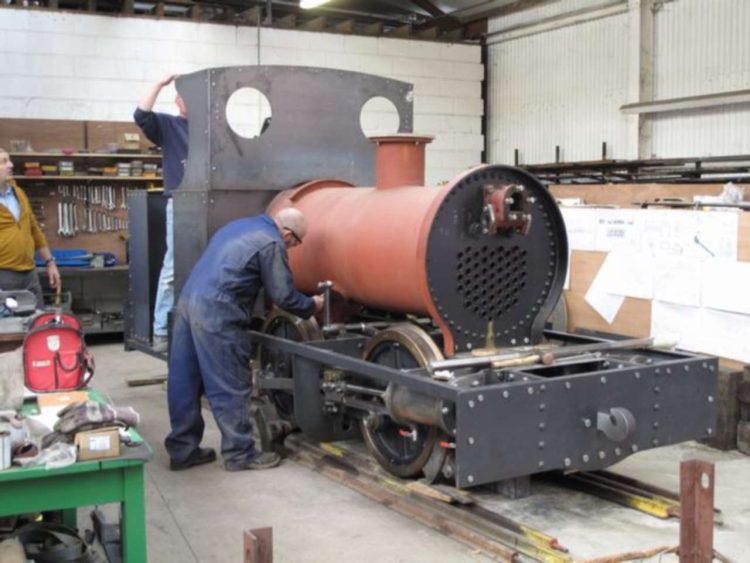 An update has been released on the construction of a new locomotive for the Corris Railway.

The locomotive, an 0-4-2 saddle tank to be numbered No. 10 in the Corris fleet, is being constructed in the workshops of Alan Keef Ltd. at Lea near Ross-on-Wye, Herefordshire.

The boiler has been trial fitted to the chassis before continuing with the erection of the locomotive. One of the largest individual and most visible of the sections being worked on is the cab, which is a taller version of that carried by the original trio of Corris locos.

An initial trial assembly took place in the workshop of a Corris Railway Society (CRS) volunteer in Nottingham. The sections were then taken to Keef’s, where they were placed on the frames for the first time. As expected, this showed that some minor adjustments were needed, but overall, this part of the project is progressing well.

Meanwhile, a Derby-based CRS volunteer is working with Keef’s to produce components for the brake gear.

Other items produced by volunteers are the buffers, which have been sent from the railway’s workshops at Maespoeth Junction to Keef’s where they will be reunited with the rest of the new construction.

Footplate sections are in place, as well as some pipe runs that will fit beneath them in situ. Drawhook blanks have been delivered ready for machining, and the regulator quadrant has also been produced.

September 2022 is the target date for the locomotive’s completion. In order to meet that deadline, the end of February has been set for the Corris Railway to supply the following components to Keef’s:

Some of the individual boiler fittings can be sponsored via www.corris.co.uk

Many of the above items are well on the way, but there is still much to do to complete them, including the absolutely crucial matter of raising the necessary finance to get No. 10 into traffic in the Dulas Valley.

Apart from the specific boiler components listed at www.corris.co.uk donations for other components can be made online.

Donations can also be made by cheque and by standing order, please visit the Corris Railway website for more information.