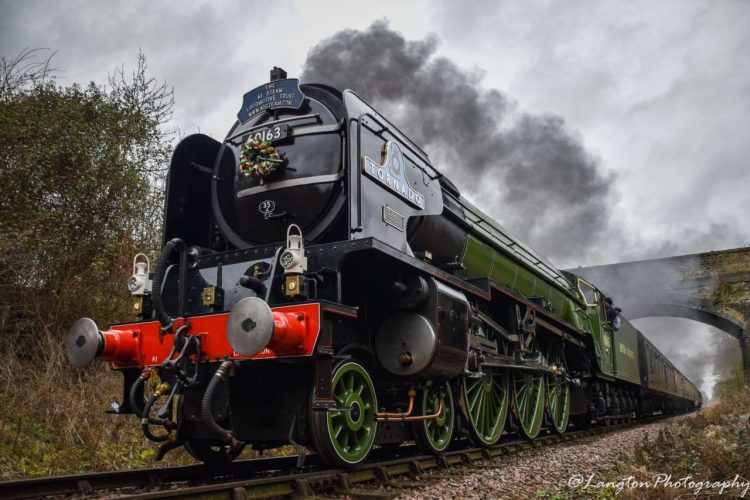 The A1 Steam Locomotive Trust has announced that they have withdrawn new-build A1 No. 60163 Tornado from the mainline.

On the 12th November, 60163 Tornado suffered a number of wheel flats caused by wheel slide during the leaf fall season.

Examinations after the weekend did not show any issues that would cause concern. However, on Tuesday evening, the A1 Steam Locomotive Trust’s engineering team found a number of tender wheel flats that are beyond the limits of mainline service.

Normally, this would be resolved by visiting a wheel lathe for re-profiling. However, the tyres that the locomotive is currently running on would reach scrapping size should they turn again.

This is the reason why new driving and tender wheel tyres are being fitted during the upcoming overhaul.

This means that the A1 Steam Locomotive Trust has taken the decision to withdraw the locomotive from main line service.

Tornado will soon move to the Great Central Railway for ETCS equipment to be fitted, and a number of operating days will be confirmed in due course.

The Trust is now focussing on the overhaul next year and a return to main line operations.

A spokesperson for the A1 Steam Locomotive Trust said “We are sorry to advise that on the 12th November Tornado suffered a number of wheel flats. This was caused by a slide during the current leaf fall season.”

“Sadly, the locomotive is currently running on tyres that would reach scrapping size should they be turned again. It is very frustrating given the new tyres are already in Devon ready for fitment.”

” Whilst it is disappointing to see this year’s mainline season end early, our focus is on completing the overhaul next year and seeing a return to main line operations. The team continues to finalise the plans for this work which will commence in the New Year as previously announced.”