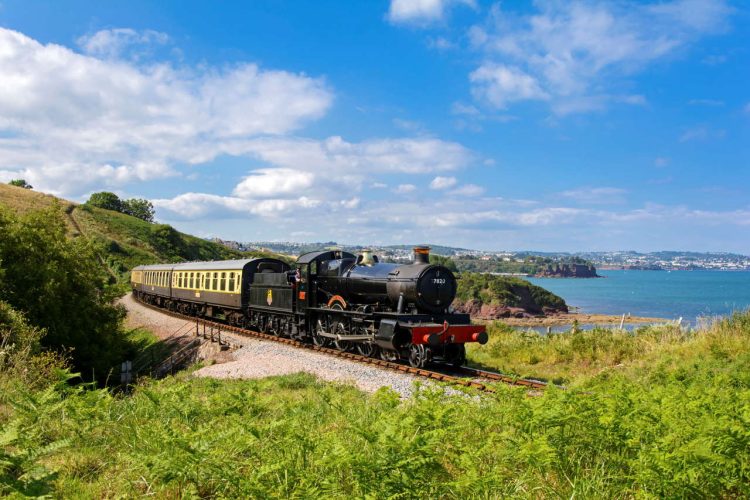 The South Devon Railway has announced that BR-built No. 7820 Dinmore Manor will be visiting them to haul their Winter 2021 Services.

The visit of Dinmore Manor is thanks to its owning group, Dinmore Manor Locomotive Ltd, and its home railway, the Gloucestershire Warwickshire Railway.

Dinmore Manor will be used to haul The Polar Express Train Ride, which operates on selected dates in November and December and is being run by the SDR and PNP Events Limited, with a majority of seats now sold out.

A three-day winter steam gala, Mince Pies, Manor and More will be held from Friday 31st December until Sunday 2nd January which will feature Dinmore Manor and the SDR’s home fleet of locomotives.

GWR Manors were built to allow the fleet to run on routes with lower route availability, which was determined by size and weight of locomotives, including the well-known Cambrian Line in Wales.

Dinmore Manor was the first GWR Manor to be built for British Railways and was completed in November 1950.

Whilst never seen on the Buckfastleigh line whilst part of the national network, other Manors have previously run on the South Devon Railway and have proven popular with visitors and crews.

Commenting on the visit of Dinmore Manor, SDR General Manager Ernest Elsworth-Wilson said: “We are delighted to be having Dinmore Manor visit the SDR and wish to thank owners Dinmore Manor Locomotive Ltd and the Gloucestershire and Warwickshire Steam Railway, for facilitating the visit.

“Our new event for Christmas, the Polar Express Train Ride, will provide an amazing festive experience for all of our visitors, and having the magnificent Dinmore Manor at the head of our trains will further add to the Christmas magic!

“We are also very excited to be able to once again operate a steam gala after what has been a difficult couple of years and, being right in the middle of winter, this should provide a very atmospheric experience for our visitors and staff as Dinmore Manor and some of our home-based locomotives haul trains alongside the River Dart on the crisp winter days.”