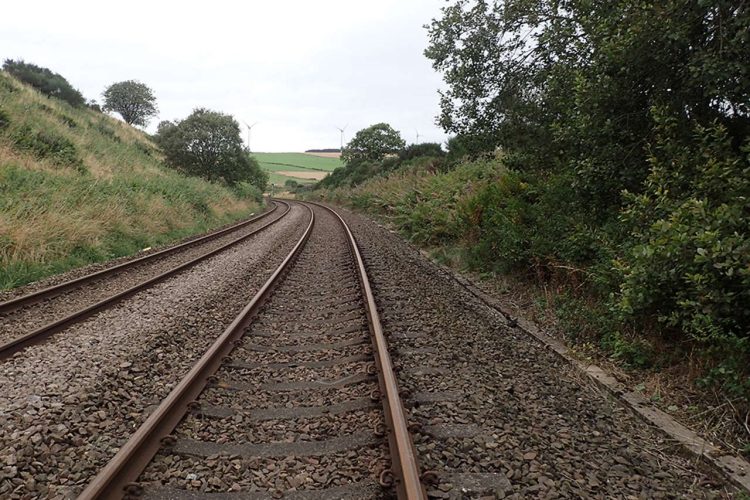 The Rail Accident Investigation Branch (RAIB) has released its report into six trains exceeding a temporary speed restriction on the line between Laurencekirk and Portlethen, Aberdeenshire.

On 4 December 2020, a temporary speed limit was in force between Laurencekirk and Portlethen in Aberdeenshire.

From the start of service that day until 9.00 am a limit of 40 mph (64 km/h) had been imposed as a ‘blanket’ emergency speed restriction (BESR) because heavy rain had been forecast for the area, and there was a danger that the rain could cause a landslip to obstruct the line.

The normal maximum permitted speed for the line is up to 100 mph (161 km/h). Although some trains complied with the BESR , other trains exceeded the BESR limit. Fortunately, the total rainfall was insufficient to cause any earthwork failures, and no accident occurred.

The investigation found that some drivers were unaware of the BESR, whilst others were unaware of its exact extent. The only information that drivers received about BESRs was in notices displayed in ‘Late Notice’ cases at locations where they reported for duty.

The notices did not provide information in a clear, easily understood way, nor in a way that drivers could remember where BESRs applied. Lineside signs were not installed in the locations where BESRs were in operation, and there were no other reminders at the approaches to the restriction. The BESR notice stated speed limits in terms of both mileages and lineside features, but these did not correspond to each other.

ScotRail did not appreciate that use of the Late Notice case was an unreliable way to implement BESRs, although some managers had improved their reliability by making local changes to the formal system. The RAIB observed that compared with good practice in human factors, there were shortcomings in the BESR form, both in Network Rail procedures and in variants used in Scotland and on other routes.

RAIB concluded that the railway industry has more work to do to establish a suitable method for imposing speed restrictions, where extreme weather has the potential to endanger infrastructure. As a result of this investigation, the RAIB recommended that there should be an improvement in how BESR notices are provided to drivers. The methods used to implement BESRs should also be reviewed. The recommendations emphasise the importance of drivers being aware of information contained in late notices, and that safety-critical communications should provide clear and unambiguous information.

Simon French, Chief Inspector of Rail Accidents, said: “RAIB is concerned at the number of overspeeding incidents which occur at speed restrictions on the mainline network. Network Rail’s national daily report has recorded 7 cases so far in 2021, up from 5 in the whole of 2020, and some of these involved speed limits being exceeded by over 80 miles per hour.

“This report highlights some of the causes of overspeeding. It shows how important it is to convey information to train drivers about emergency speed restrictions in a way that they can understand and retain. This is particularly vital where, as in this case, there are no lineside signs to mark where the restrictions begin and end. As we saw in an incident at Sandy in 2018 (RAIB report 10/2019), it is possible for a driver who has not been given advance notice of a speed restriction to take their train through it much faster than is safe. Since then, the tragic accident at Carmont in 2020 has resulted in the introduction of a new process which Network Rail uses to impose speed restrictions over areas affected by severe weather, such as heavy rain, which might cause the failure of earthworks.

“The railway industry has more work to do to establish a suitable method for the imposition of speed restrictions which are needed in response to extreme weather that has the potential to endanger infrastructure. In this case the industry’s processes were ineffective, and it is fortunate that the weather was not as bad as feared and that no accident occurred.”