Poppy makeover at Transport for London for Remembrance Day 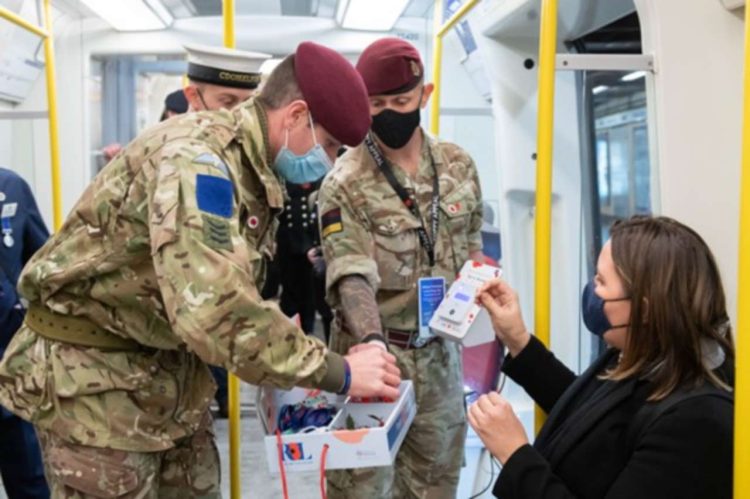 Six London buses have been specially wrapped in giant poppy vinyls as well as DLR, TfL services and Santander Cycles. Poppy flags will also by flying from TfL owned piers.

Poppy collections have returned to the Transport for London (TfL) network as they support the fundraising of Royal British Legion (RBL) ahead of Remembrance Day this Sunday to pay tribute to servicemen and women.

Liverpool Street station saw the start of the fundraising on 4th November with guest appearances from Ross Kemp, an Armed Forces ambassador and magician winner of Britain’s Got Talent in 2016 Lance Corporal Richard Jones.

Many of the Underground and Rail services on the day heard a recording from Ross asking people to give generously. A special collection took place on the day with Richard and members of the Armed Forces on the Circle Line to encourage donations.

Contactless donations are now possible to help the Royal British Legion (RBL) provide important help to members and veterans and their families. Because of the pandemic fundraising was considerably less in 2020.

Over 3,000 fundraisers and volunteers have joined forces across the TfL Rail and Underground network, including individuals of the Armed Forces from the British Army Royal Navy and Royal Air Force, to fundraise at 50 Stations across London.

At 11am on Thursday 11th November, all London stations will become silent to remember those who fought for their country. Members of the London Transport Old Comrades Association will join the Remembrance Day Parade to the Cenotaph this Sunday 14th of November for Remembrance Sunday.

The ten London Underground stations that have Poppy Roundels installed are:

The 14 London Overground stations that have Poppy Roundels installed are:

Andy Lord, Managing Director for London Underground at Transport for London, said: “TfL has a longstanding relationship with the Royal British Legion, and we are extremely proud to support their fundraising for veterans, serving personnel and their families. We had to reduce charity collections in our stations last year due to lockdown restrictions, so we’re happy to welcome back RBL volunteers into our stations for the Poppy Appeal and help raise money for this incredible charity.”

Gary Ryan, Director of Marketing, Fundraising and Remembrance at the RBL, said: “This year, as we mark the RBL’s centenary, we are very grateful to once again have the unwavering support of Transport for London for our annual Poppy Appeal.”

“It is great to see the range of activity from poppy roundels at stations to the hundreds of Armed Forces collectors who returned to stations across the network for this year’s London Poppy Day, we are proud to partner with TfL because they support us to ensure every poppy counts.”

“In our 100th year, we are very thankful to our network of volunteers, members, fundraisers and partner organisations, like TfL, who share our passion for bringing people together to support, commemorate and celebrate our Armed Forces community.”

Tesco Express: 8,000 tonnes of food and essentials transported to Scotland by rail each day