Poppies to Paddington with The Veterans Charity and Great Western Railway 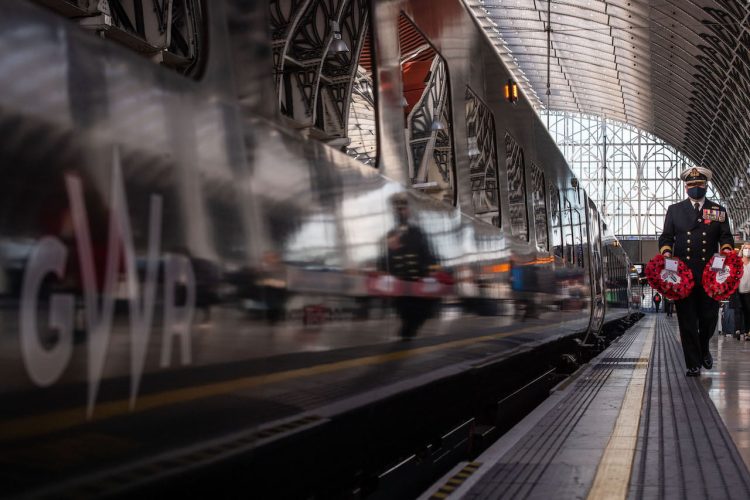 Great Western Railway teamed up with The Veterans Charity and the longest-serving female in the Royal Navy, Barbara McGregor for the Poppies to Paddington operation

Barbara travelled by train from her hometown of Bridgend carrying a wreath which she later laid at London Paddingtons iconic War Memorial on platform 1, as part of the Great Western Railways’ second Poppies to Paddington operation on Remembrance Day.

Record-breaking Barbara, 62 was added to the Guinness World Book of Records this August following an incredible career with the Royal Navy of 43 years and 189 days, retiring on the 31st of January 2021.

Barbara joined the Royal Navy as a radio operator in 1977 and served at HMS Heron, Yeovilton, HMS Dryad, Portsmouth, and HMS Rooke, Gibraltar and was later deployed at HMS Raleigh and Cornwall, where she trained new female ratings. More recently, Barbara became the Regional Development Manager for the Naval Regional Command Wales and Western England.

Even though Barbara retired as the most senior Warrant Officer of the Royal Naval Careers Service, she will continue to attend Remembrance services as a trustee of the Association of Wrens.

Poppies to Paddington was initially created to enable communities on the GWR network to honour their fallen heroes in spite of the Covid-19 restrictions of 2020.

This year, Barbara’s wreath was just one of a large number of wreaths taken by train to Paddington station following the success of last year’s Poppies to Paddington event, which saw over 250 wreaths carried to the station.

The success of the GWR Poppies to Paddington operation in 2020 has led to The Veterans Charity creating The Routes of Remembrance campaign which has seen wreaths and tributes placed across the country and in significant locations around the world with the support of 11 rail operators, ferry companies, airlines, veterans, business and private individuals.

Barbara said: “It was wonderful to be involved and a wonderful gesture from GWR. To think that a little part of Neath, Port Talbot and Bridgend could be represented in this way was fantastic, and it was lovely to see wreaths from other parts of the network arriving by train.”

GWR Managing Director Mark Hopwood said: “Last year Remembrance had to be very different and, working with The Veterans Charity, we ensured communities around the GWR network could get involved.

“This year we are pleased to be bringing people together again in this unique and moving act of Remembrance.”

Danny Greeno, CEO of The Veterans Charity, said: “Working with GWR last year was brilliant and really helped make it special, so this year there are many more operators, expanding it even further.

“The pandemic hasn’t gone away yet, so this is for the veterans, who can see that Remembrance is happening in a very unique way. Plus it celebrates the deep links between the railways and the military.”

Lt General Sir Andrew Gregory, CEO of SSAFA, the Armed Forces charity, said: “The pandemic has highlighted the importance of those people who put others before themselves. During the national remembrance period Great Western Railway is once again commemorating the services and sacrifice of members of the Armed Forces along their routes who, by their very duty, put others before themselves.”

Improvements to the Southampton to Bournemouth line completed on time