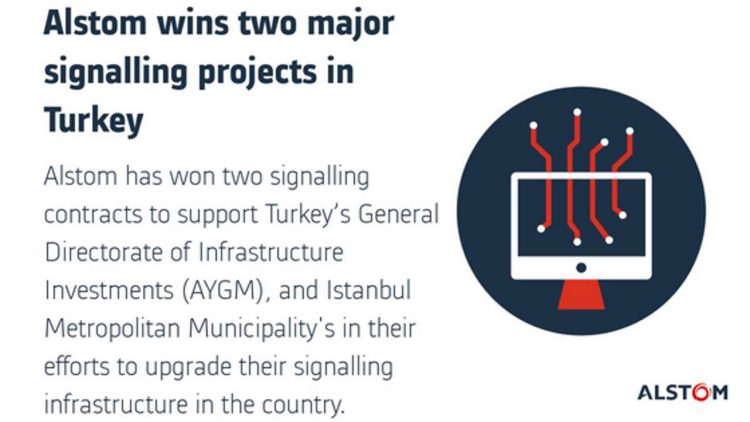 The extent of AYGM will see both construction and supply of electromechanical works for the Bandirma– Bursa– Yenisehir– Osmaneli (BBYO) which is an almost 201km long, high standard railway project.

Alstom will also install a smart object controller as part of the system to remove obsolescence risks with legacy systems and provide the capability for the line’s signalling systems to interface over modern fibre-based digital networks and GSMR (railway communications system) to enhance reliability, performance and functionality. On completion of the project, BBYO line will be completely interoperable to all trains on the Turkish network.

The second contract will also see the provision of wayside equipment for 8 stations alongside on-board systems, and the Based Train Control (CBTC) signalling for 4 new trains. The driverless systems will shorten headways between trains by 90 seconds.

Digitalisation is vital to support sustainable mobility, by increasing the capacity of the current infrastructure alongside the added benefits of increased comfort and safety on the railway.

“We are honoured to deploy a number of digital-ready technologies that will bring much-needed reliability improvements to support traffic levels and deliver greater efficiencies.”

“As I am starting my new position as the Managing Director of Alstom in Turkey, I am extremely happy to see the impact of Alstom as a leader of sustainable and innovative mobility in the country. We are honoured to deploy a number of digital-ready technologies that will bring much needed reliability improvements to support traffic levels and deliver greater efficiencies,”