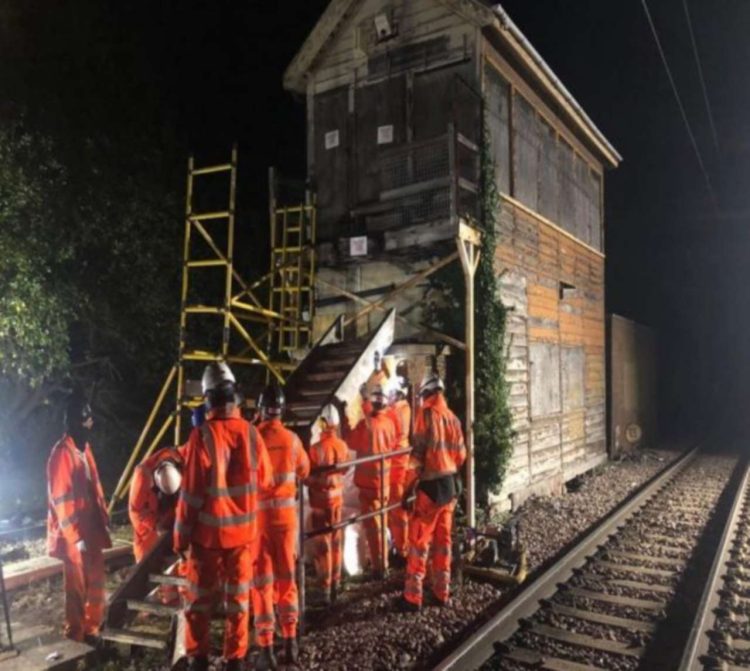 A historic signal box at Hertford East station has been successfully dismantled and is to be re-erected at Leyburn on the Wensleydale Railway in North Yorkshire.

In a project partly funded by the Railway Heritage Trust, the signal box was dismantled piece by piece, each piece was catalogued, removed, and packed onto flat-bed lorries ready to be transported to North Yorkshire.

Even some of the original foundations were removed as part of the removal project.

The work required Greater Anglia’s line between Broxbourne and Hertford East to be closed for eight days.

During that time, as well as dismantling the signal box, preparations were made to extend the station platforms so that they can accommodate Greater Anglia’s new commuter trains when they are ten carriages long.

While the line was closed, engineers also carried out survey works in preparation for platform extensions that will take place next year at Rye House, St Margarets (Herts), and Ware.

Jamie Burles, Greater Anglia managing director, said: “Thank you very much to all customers for their patience during these works.

“We are very pleased that a little piece of East Anglian heritage will find a new life in North Yorkshire as the railway continues to change and evolve.”

“New five-carriage trains are already running on the line for some services. After we have made the platforms longer they will be able to run as ten carriages at busier times of day, giving customers even more seats.”

Andy Savage, executive director of the Railway Heritage Trust, said: “We have been concerned about the listed signal box at Hertford East for many years and that it has not been possible to find a local use for it.

“With the need to relocate if for a new platform this provided the perfect opportunity to not only relocate it, but also give it back to its original purpose of controlling the movement of trains. We have been very happy to support this project financially.”

“The Victorian signal box will be carefully restored, largely by volunteers, to its original condition at Leyburn on the Wensleydale Railway. The signal box is a key part of the site development where it will be made fully operational again, controlling train movements through the station.’

Ellie Burrows, Network Rail’s route director for Anglia, said: “Relocating the old Hertford East signal box will help keep the railway safe and reliable for passengers for years to come and enable Greater Anglia to bring in its longer modern trains. As the custodian of many historical signal boxes, we try and work with industry partners to give them a new lease of life and be enjoyed for years to come.”

Greater Anglia’s new commuter trains are longer than the ones they replaced and have more seats. Every train has USB and power points, improved accessibility features including an accessible toilet, better passenger information screens, and dedicated cycle spaces.

The trains are the first in the UK to have underfloor heating, which works with an overhead heating and ventilation system to improve passenger comfort, and passengers sitting in window seats have increased foot room.

The trains also have regenerative braking, which delivers energy back into the electrical supply network, rather than wasting the energy through heat, as is the case with conventional systems.