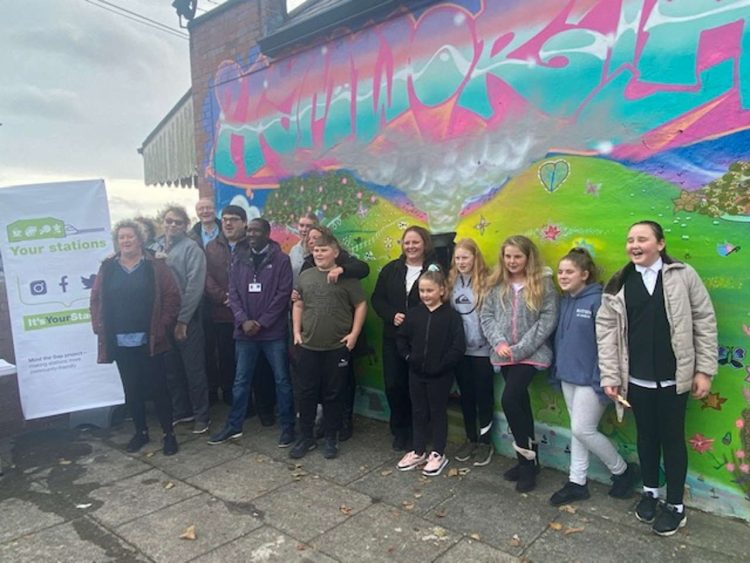 Hamworthy railway station gets a makeover thanks to the local community and ‘Mind the Gap’ project.

Saturday saw murals and planters go on show at the station for the first time. The new editions brighten up the station, making it more welcoming for passengers and staff.

The fresh planters give a fresh natural feel to the station, whilst the murals painted by young local adults bring colour.

Local community worker Ann Khambatta who died earlier this year in January is behind the murals. Ann was asked if she could make Hamworthy Station more welcoming with the help of the local community.

Ann’s project took off after the station adopter, Mel Lucas organised workshops to work with local youngsters and a couple of local graffiti artists where the planning began and then the creation of the murals emerged. Last weekend saw their hard work go on show on platforms. They will also soon paint the tunnel at the station too.

South Western Railway (SWR) supported the makeover at Hamworthy station through their Customer and Communities Improvement Fund, which forms part of the ‘Mind the Gap’ scheme where locals are inspired to take part in helping make their local station more appealing. More improvements are planned for stations in the area.

Mel said “It has been a great opportunity to improve the feel of Hamworthy station and for the young people involved the impact has been immediate and so positive. We have had many compliments from both residents and train passengers who say how much it has brightened their day. We have also been pleased by the reaction from staff in and around the station who have been involved in conversations about placing the planters and ongoing developments of the artwork. A really fun project that has had so many benefits, thanks to Mind the Gap for the funding to make it all possible!”

Paula Aldridge, SWR’s Community Rail Manager said “We are delighted to have helped the local community at Hamworthy to make their station a brighter and more welcoming place. Other local stations in the area will soon start to see improvements thanks to the Mind the Gap scheme”.